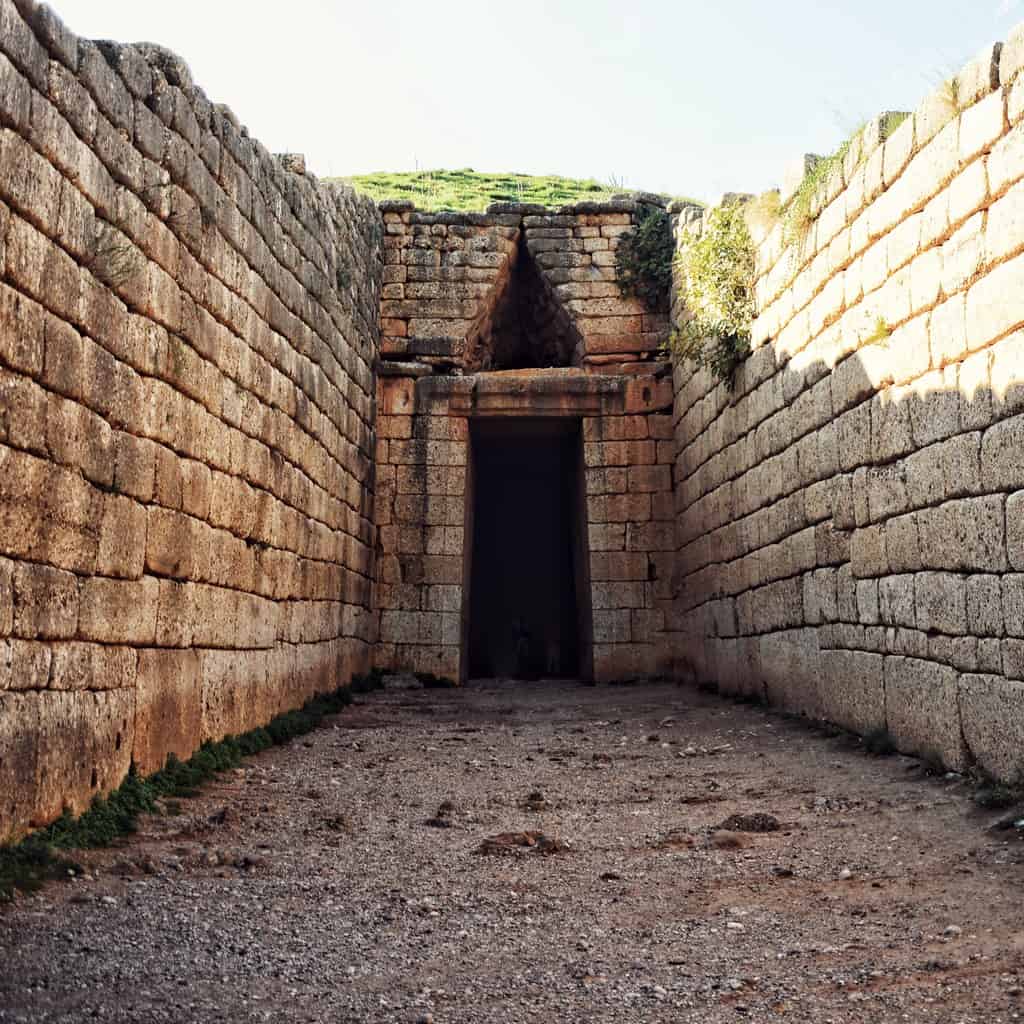 Take Agamemnon. The powers in heaven
permitted him to capture Priam’s town,
to return home honoured by the gods.
But now, if he must pay the penalty
for blood which other men before him shed
and die in retribution for the dead
he k**led himself, what mortal human being
who hears all this can boast he lives
a life unscarred by fate?

Among the great Mycenaeans, King Agamemnon stood alone. The classical Greeks thought him so great they often portrayed him and Zeus interchangeably.

The tales of his life and his brother Meneleus (whose wife Helen was kidnapped to start the Trojan war) were well-known across the ancient Greek world.

Mycenae and Tyrins are the ruins of the ancient culture that produced these legends that later wound their way into Homer and throughout Greek literature.

See also
23 Pieces of The Best Street Art in Athens

After a lovely morning in Epidaurus, my day tour went to lunch (iffy) and Mycenae (amazing!). I’ve found that, like all the day tours I went on in Greece so far, everything runs smoothly and on time. The food is whatevs, which is why I don’t buy it if there’s an option to go out on your own away from the group instead (in Delphi this saved me €20). And the guides are very knowledgeable, but they err on the side of giving you too much information and eating up time when you’d rather go out and explore the site.

I spent all of my free time walking up the citadel and through Circle Grave A. I skipped the museum, since most of the good stuff is at the National Archeological Museum of Athens and I’d already been. Instead I just wandered dreamily around until my time there was up.

(We didn’t go to Tyrins, but I did get to see a lot of the artifacts and wall paintings in the museum in Athens).

We stopped at the Citadel and saw the royal graves, and after our free time we went to the Tomb of Agamemnon (also called the Treasury of Atreus).

What I knew about the real place Mycenae (outside of history and mythology) before I got there:

While I had a good understanding of the mythology and literature about Mycenaean Greece, I had a tenuous grasp on it as an actual physical site. I assumed there’d be rocks. These places always seem to be covered with rocks.

But visiting is so much more than that! First of all, its gorgeous! It’s located on a promontory and sits among beautiful mountains and green fields.

Second, in Greece, you spend so much time in awe of things built in the sixth or fifth century BCE. Then you get to Mycenae and you’re looking at ruins a thousand years older than that. It’s mind-blowing.

The Archaeological Sites of Mycenae and Tiryns…are the imposing ruins of the two greatest cities of the Mycenaean civilization, renowned for its technical and artistic achievements but also its spiritual wealth, which spread around the Mediterranean world between 1600 and 1100 BC and played a vital role in the development of classical Greek culture. The palatial administrative system, the monumental architecture, the impressive artefacts and the first testimonies of Greek language, preserved on Linear B tablets, are unique elements of the Mycenaean culture; a culture that inspired the great poet Homer to compose his famous epic poems.

The citadel of Mycenae…is the kingdom of the mythical Agamemnon and the most important and richest palatial centre of the Late Bronze Age in Greece. Its name was given to one of the greatest civilizations of Greek prehistory, the Mycenaean civilization, while the myths related to its history, its rulers and their family members (such as Clytaemnestra, Iphigenia, Elektra, Orestes) have inspired poets, writers and artists over many centuries, from the ancient to the contemporary times.

I went on a day tour from Athens that covered more than one place, so I didn’t end up going directly. Here is a good thread on getting there if you aren’t on a tour. It’s near Nafplio, which is a pretty cute town. I was happy we stopped there. If your bus exchanges there and you have the time, I would go walk down to the harbor.

Admissions were included in my tour, but the regular entrance fee is €12.