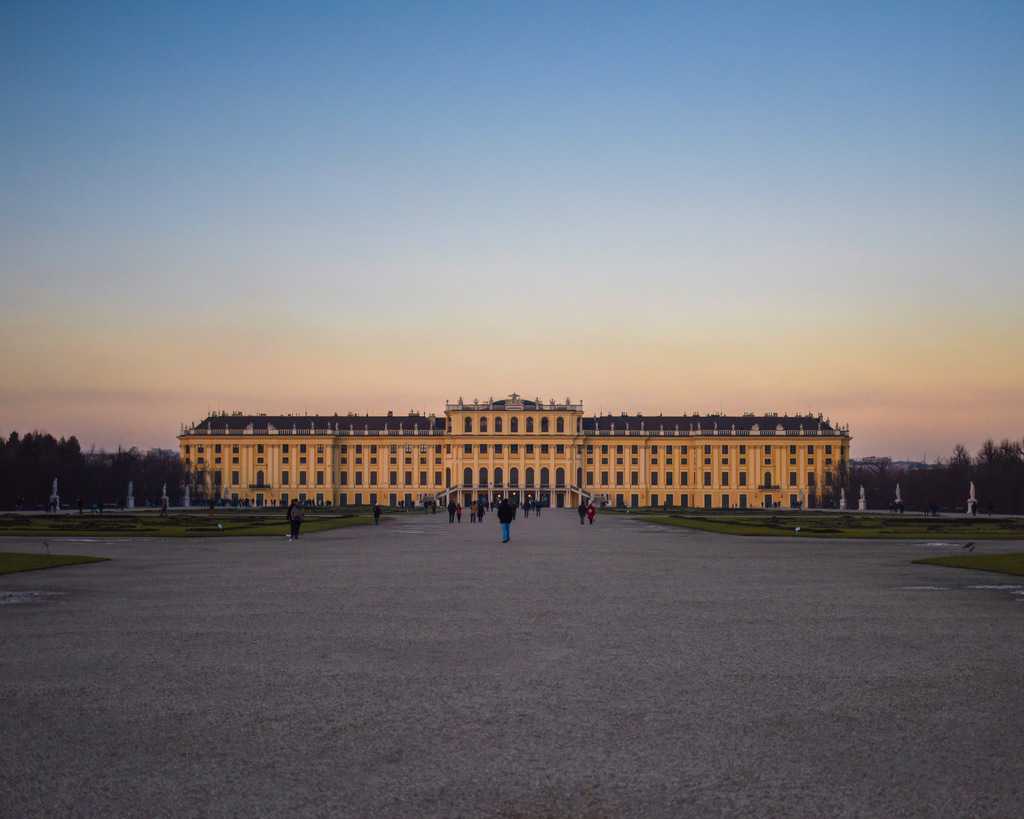 I’ve only ever imagined visiting Schoenbrunn in summer. I pictured walking dreamily through the gardens, touching the flowers wistfully with the tips of my fingers, while pretending I’m the empress and I was about to commission a really awesome portrait of myself before going horseback riding and then flirting with an archduke. #goals

But I never thought about what it would be like to visit in the frigid cold of December, on a day when the sun starts setting at 4 pm, when all the plants are dead and the water is frozen and the fountains are shut off.

Don’t get me wrong, it was still awesome. Plus, the Christmas market in front of the palace smelled delicious and festive. I mean, you can’t really beat seeing Vienna at Christmas. My visit was just more getting excited about pretty rooms and cinnamon-sugary things than exploring the expansive grounds, and I booked it out of the gardens as quickly as I could, stopping only to snap (and Snapchat) the necessary photos for this piece.

Schoenbrunn Palace is one of those places you’ve probably seen in a history textbook, even if you can’t place it. It’s on every Vienna itinerary, no matter how short the trip. Vienna was the home of the Hapsburg dynasty and de facto capital of the Holy Roman Empire and later the official capital of the  Austro-Hungarian Empire. During this time, the wealth that flowed into the city made it into its architecture. As grand as Schoenbrunn palace is, it’s often referred to as a “hunting lodge” from its original use. It was a wedding gift to the Empress Maria Theresa and was used as the Hapsburg summer home until the end of the empire during World War I.

Famously modeled after Versailles, Schoenbrunn is one of the major triumphs of Baroque architecture.

The site of the Palace and Gardens of Schönbrunn is outstanding as one of the most impressive and well-preserved Baroque ensembles of its kind in Europe. Additionally, it is a potent material symbol of the power and influence of the House of Habsburg over a long period of European history, from the end of the 17th to the early 20th century.

It is impossible to separate the gardens from the palace, of which they form an organic extension: this is an excellent example of the concept of Gesamtkunstwerk, a masterly fusion of many art forms.

Getting to Schoenbrunn Palace

I was so looking forward to visiting Schoenbrunn that I rented my AirBnB in the thirteenth district. I got to the palace by walking about thirty minutes through my neighborhood. Initially, I went in the evening to go to the Christmas market, and then again the next day for the official tour and a second stop at the Christmas market.

If you’re not in the neighborhood, you can get there easily via public transportation. Here are instructions from the official Schoenbrunn website to get there, which should be updated as transit changes.

The ticket office is near Gate A (the gate with the two eagle columns). When I went, it was a madhouse. I purchased a ticket (about 17 euros) at one of the ticket machines. The ticket had a printed time to return to start, for me I had to wait an hour and a half before I could go in. You have choices of how much of the palace you want to see, which changes the price of the ticket. When it’s time to enter, you can get a free audio guide or download the audio guide app.