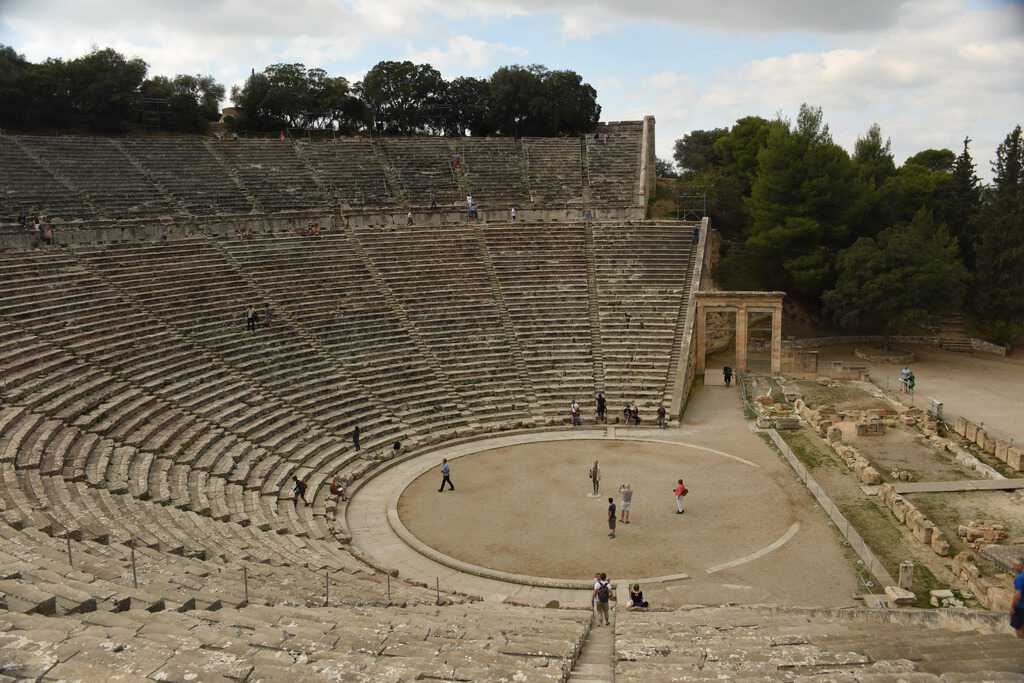 Epidaurus, Epidaurus. When you think of visiting Greece and taking in some of the most significant historic places in the world, you think of climbing to the top of the Acropolis to stare down the Parthenon and whispering questions to the Oracle of Delphi.

You might picture exploring the seaside Temple of Poseidon or marching under the Lion Gate at Mycenae to the palace of Agamemnon. Or wandering the ancient agora and stumbling upon the Temple of Hephaestus. Or running your own race from Marathon. Or at Olympia. Or contemplating the workings of the world at Aristotle’s Lyceum.

But you will not think of Epidaurus. Which is a shame, because Epidaurus is magical.

Epidaurus is actually the third UNESCO site I went to in Greece, after the Acropolis and Delphi. But for some reason, as much as I love those other two, this is the one I’m most excited to share.

Originally I had planned on doing the day trips outside of Athens by train and bus, but when I priced them out plus the extra travel time, I ended up choosing to do organized tours instead. Since I’m camped out in an apartment in a residential neighborhood, these tours have been some of the only time I’ve interacted with other tourists on this trip. It’s hit or miss. Sometimes being around other tourists makes me want to bash my head into a wall. Somewhere in the last ten years I turned into a major introvert. But this trip there were some really cool cats (and one British lady that drove me bonkers, but in the end she was aight).

I went on a day tour that combined this with the UNESCO site at Mycenae, which was also wonderful. The tour company was easy to work with, and the guide was knowledgeable. I don’t really do tour company reviews, but so far anything I’ve booked in Greece through Viator has been sightly overpriced but luxuriously simple.

See also
How to Visit the Monastery of Daphni in Athens

This was one of those places I put on my itinerary out of deference to UNESCO, and unlike some places, this time they delivered.

In Greek mythology, Asclepius was the son of Apollo and the god of medicine. However, the healing center at Epidaurus actually predates the cult of Asclepius and is considered the cradle of medicine. The asclepion of Epidaurus was the most famous healing center in the ancient world, and it was active as early as the second millennium BCE.  The exact mythology and practices evolved over time, and it was in existence until the fourth century CE. People would come from all over to seek medical treatment and cures for their ails.

Because of the prosperity the asclepion brought to the town, they were able to create large civic monuments and buildings. This included the erection of the Great Theater in 340 BCE by the architect Polykleitos.

Initially, in the 2nd millennium BCE it was a site of ceremonial healing practices with curative associations that were later enriched through the cults of Apollo Maleatas in the 8th century BCE and then by Asklepios in the 6th century BCE. The Sanctuary of the two gods was developed into the single most important therapeutic center of the ancient world. These practices were subsequently spread to the rest of the Greco-Roman world and the Sanctuary thus became the cradle of medicine.

Among the facilities of the classical period are buildings that represent all the functions of the Sanctuary, including healing cults and rituals, library, baths, sports, accommodation, hospital and theatre.

The site is one of the most complete ancient Greek sanctuaries of Antiquity and is significant for its architectural brilliance and influence. The Sanctuary of Epidaurus (with the Theatre, the Temples of Artemis and Asklepios, the Tholos, the Enkoimeterion, the Propylaia, the Banqueting Hall, the baths as well as the sport and hospital facilities) is an eminent example of a Hellenic architectural ensemble of the 4th century BCE.

Being there, the air is crisp. You are surrounded by beautiful mountains and greenery. It has the spark of a place you feel might be curing you of something you didn’t even know you had. And then you step into the theater.

The theater is the best preserved of the remaining classical Greek theaters. You stand at the top, or sit in one of the seats, and, if you shut your eyes, you can see Antigone pleading before you. You can hear Oedipus’s cries. And staring at the gorgeous mountain backdrop, with the curative air in your lungs and the sun on your face, and thinking about the great works of Sophocles or Aesculus being performed in front of you, it’s impossible not to feel a connection with history deep in your bones.

There’s a museum to visit (very small) and some other ruins to wander through. These are lovely. The whole place is lovely. But really, the play is the thing, or at least the theater is.

The city is about two hours away from Athens, near Nafplio. I took a day tour, so I didn’t have to work out how to get there through public transit. This website for the modern festival has driving directions.

See the theater. Climb the steps. Some people like to play with the stellar acoustics by reading at the center and having people at the top confirm they can hear. Someone in my group decided to read an ode thanking all the great authors of literature. That was a bit much.

After the theater, check out the museum and other ruins. My guide said they weren’t that cool, but I really enjoyed them.

There’s not a lot you can get wrong here. Don’t get lost on your way, I guess? Once you get there, you can’t mess it up.