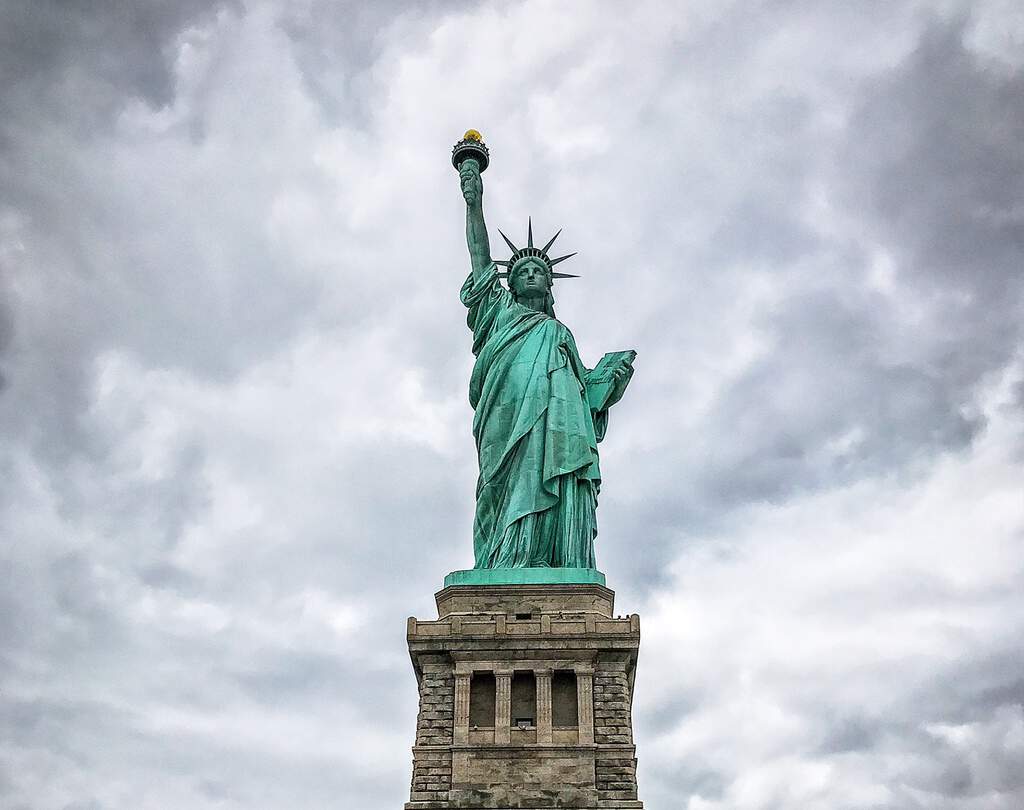 Not like the brazen giant of Greek fame,
With conquering limbs astride from land to land;
Here at our sea-washed, sunset gates shall stand
A mighty woman with a torch, whose flame
Is the imprisoned lightning, and her name
MOTHER OF EXILES. From her beacon-hand
Glows world-wide welcome; her mild eyes command
The air-bridged harbor that twin cities frame.

“Keep, ancient lands, your storied pomp!” cries she
With silent lips. “Give me your tired, your poor,
Your huddled masses yearning to breathe free,
The wretched refuse of your teeming shore.
Send these, the homeless, tempest-tost to me,
I lift my lamp beside the golden door!”

Our sixteen-year-old heroin, rocking an Oklahoma Shakespeare in the Park t-shirt, wide leg jeans, a Jansport backpack, and a discman walks across Liberty Island. Under the heavy influence of Rage Against the Machine, she contemplates America’s failed promise to the world.

Pre-Trump, Pre-Iraq, Pre-Afghanistan, Pre-9/11, the political mood of the country was so different. Fresh off the heals of Bill Clinton’s impeachment, a month away from the 2000 election, the world seemed to be heading in an entirely different place. I cared about things like the World Trade Organization and was flirting with joining the Green Party. Oh how naïve that girl had been!

Skip ahead sixteen years, to the early days of the Trump administration, I’m walking around the island in tears at how America’s image is being tarnished by a foul-mouthed, immigrant hating, racist, misogynist tyrant. I’d love a good free trade agreement to get through Congress, and I wish Jill Stein would crawl back under whatever anti-vaxer rock she climbed out of.

I think I’ll have to visit again in 2032 to see how that compares to my first two visits.

Melodrama aside, visiting the Statue of Liberty is both a schlock-filled touristy schlock-fest and a rite of passage every American should have to go through. A day thinking about the sacrifices our ancestors went through (willingly or unwillingly) and how it got us to where we are (for both good and for ill), is incredibly humbling. Whatever kind of patriot you are, it centers you.

It’s weird to think about how some people think visiting the statue is uncool-something just for tacky, sticky tourists.  But it is so much more than that. People all over the world think of her as a symbol of freedom. The first time I visited, I didn’t have a global perspective (or even know what a UNESCO World Heritage Site was before I started reading Everything Everywhere). But this is a classic case of “I was a teenage brat,” and the intervening decades have humbled me.

In some ways, this is too easy. It’s a giant statue on its own island. You can climb up if you buy tickets early enough. You can eat at the cafeteria or shop in the gift shop. You can walk around and take pictures of the Manhattan skyline. That’s kind of it.

In others, it’s more complicated. It’s a space dedicated to an idea, and the idea has one giant statue of a symbol, art and architecture existing solely to make one think about democracy and patriotism and liberty and freedom. It’s history as a symbol seen by millions of others before you, living lives so different from yours and from each other. It’s a symbol you think you already know, already own. But it originates somwhere and being at that place is haunting.

The Statue of Liberty, a hollow colossus composed of thinly pounded copper sheets over a steel framework, stands on an island at the entrance to New York Harbor. It was designed by sculptor Frédéric Bartholdi in collaboration with engineer Gustave Eiffel, and was a gift from France on the centenary of American independence in 1876. Its design and construction were recognized at the time as one of the greatest technical achievements of the 19th century and hailed as a bridge between art and engineering. Atop its pedestal (designed by American architect Richard Morris Hunt), the Statue has welcomed millions of immigrants to the United States since it was dedicated in 1886.

The Statue is a masterpiece of colossal statuary, which found renewed expression in the 19th century, after the tradition of those of antiquity, but with intimations of Art Nouveau. Drawing on classical elements and iconography, it expressed modern aspirations. The interior iron framework is a formidable and intricate piece of construction, a harbinger of the future in engineering, architecture, and art, including the extensive use of concrete in the base, the flexible curtain-wall type of construction that supports the skin, and the use of electricity to light the torch. Édouard René de Laboulaye collaborated with Bartholdi for the concept of the Statue to embody international friendship, peace, and progress, and specifically the historical alliance between France and the United States. Its financing by international subscription was also significant. Highly potent symbolic elements of the design include the United States Declaration of Independence, which the Statue holds in her left hand, as well as the broken shackles from which she steps.

There are many tour companies who have Statue of Liberty packages, though I can’t speak to any of them. I found the cheapest option I could, through Statue Cruises. For $18.50 it included a ferry from Battery Park in Manhattan to Liberty Island, a ferry from Liberty Island to Ellis Island, and a return ferry to Manhattan, alond with an audio guide and entrance to Ellis Island. This did not include entrance into the statue.

Getting to and from Battery Park was easy on the subway, although you could also Uber, Taxi, walk, etc depending on where you’re staying. You can also visit from New Jersey.

3 thoughts on “How to Visit the Statue of Liberty, NYC’s UNESCO World Heritage Site”