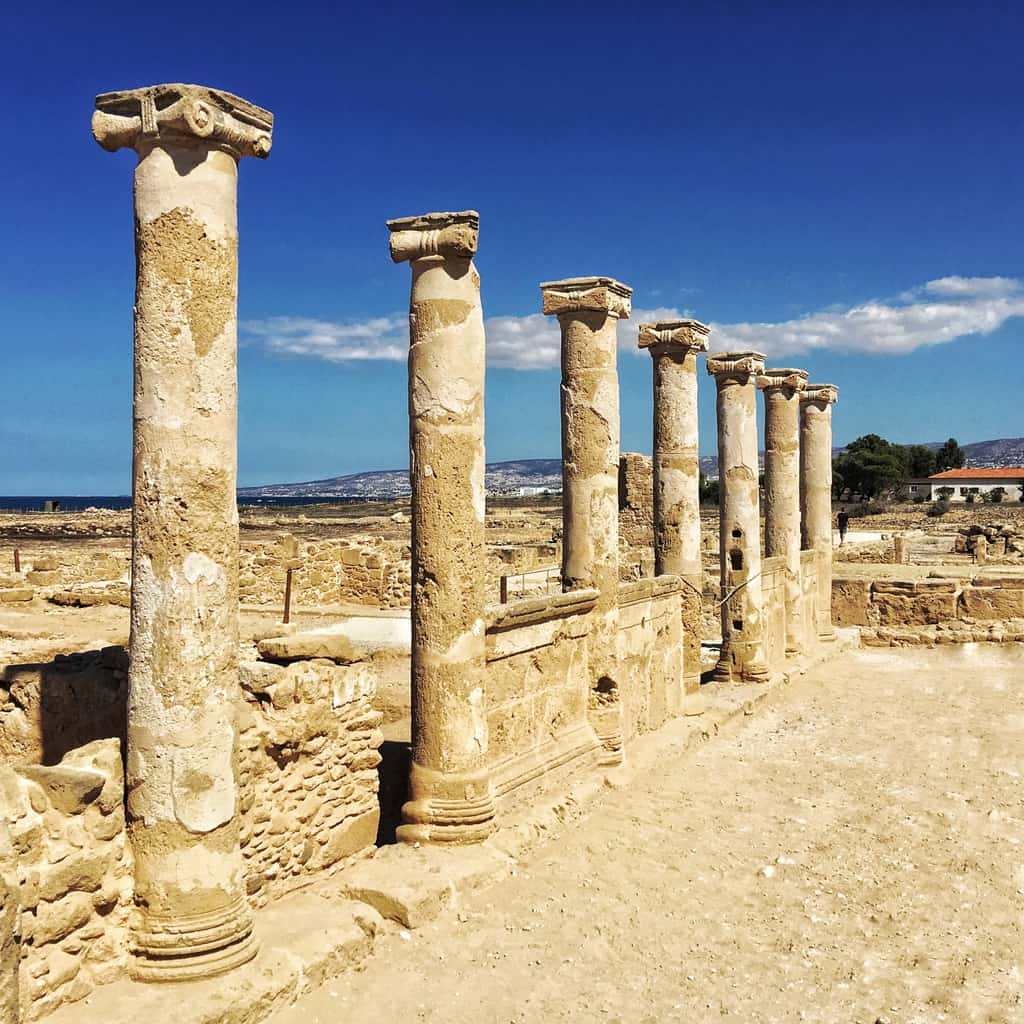 My visit to Paphos started out in a kind of weird way. I was at the central bus station in Nicosia, Cyprus, waiting to take a bus to Agya Napa, a chill beach town in eastern Cyprus. I wanted a chill beach day for two reasons:

But the bus to Agya Napa didn’t come. So I was sitting in the bus station, in my swimsuit and coverup, and I needed to do something near a beach. Quick. But I also had a pretty specific set of places I had to go on each of my non work/blog days to get in all the sites I want to see before I leave Cyprus next week.

…so when a bus to Paphos (on the complete other side of Cyprus) pulled in, it seemed perfect. I could do the UNESCO sites in the morning, and I’d be napping on a beach by 1pm. Day not wasted.

The insomnia did take it’s toll as it clouded some of my enjoyment of the (extremely hot) Valley of the Kindgs and left me a little emotionless in the face of some beautiful mosaics. But other than that, for a completely unplanned stop, it went pretty well.

The Tomb of the Kings was super eery and beautiful. Katos Paphos is a little like a small Pompeii or Ostia, an excavated Roman town that you walk around and can get a feel for what life would have been like. There are mosaic floors intact from the Roman houses.

Paphos is not one, but three separate sites combined into one UNESCO entry: the village of Katos Paphos,  the village of Kouklia, the nearby necropolis called the Tomb of the Kings.

Paphos, which has been inhabited since the Neolithic period, was a centre of the cult of Aphrodite and of pre-Hellenic fertility deities. Aphrodite’s legendary birthplace was on the island of Cyprus, where her temple was erected by the Myceneans in the 12th century BC and continued to be used until the Roman period. The site is a vast archaeological area, with remains of villas, palaces, theatres, fortresses and tombs. These illustrate Paphos’ exceptional architectural and historic value and contribute extensively to our understanding of ancient architecture, ways of life, and thinking.

I did this as a daytrip from Nicosia, so I took the inter-city bus (7 euro and about 2 hrs) both ways. Insomnia-spurred grouchiness gave me a seriously short temper, so I grabbed a cab from the bus station to the Tomb of the Kings and again from the Tomb of the Kings to the entrance to Katos Paphos (10 euro each way). Once I had a proper beach nap, I realized the Paphos buses were insanely easy, and only 1.50 euro each way. So there’s that option, too.

The entrance fee to the Tomb of the Kings was 2.50 euro and Katos Paphos was a separate fee of 4.50 euro. I skipped Kouklia, which is about 16km from Paphos.

Things to Do While Your There

At the Tomb of the Kings, you walk around a large necropolis next to the sea, that dates all the way back to the 4th century BCE. The tombs have a heavy Egyptian influence, because of Cyprus’s proximity to Egypt.

This place is gorgeous, super creepy, and so close to the sea that you can get some really interesting photographs. Get there early – it’s hot and there are no amenities and no shade. Bring water. But unless this is your first day in Cyprus, you’ll already know that.

Then if you’re smart, take the bus to to the Paphos Archeological Center. Or if you think you might fall asleep in the middle of the street, drag yourself to the way overpriced cafe across the street, nurse a 2.50 euro Pepsi Light (the lowest form of diet soda), and try to wake up. Then hail a cab.

When you get to the park, you’ll be drawn to the beautiful line of columns. But again, if you’re barely upright, you’re gonna crawl to the sad little vending machine room and load up on water and some of the most disgusting vending machine snacks seen outside of England. (England, you know what I’m talking about. Hamhocks flavored chips? Come on, man).

The archeological park has a small museum (I skipped it), and the rest is outside. After my sad time at the vending machines, I went out to the Paphos Lighthouse, which is a gorgeous, white 19th century lighthouse nearby. Then, finally feeling refreshed, I headed over to the Roman excavations and settled in.

The guidebooks and websites warn that this place can get crawling with tourists, but since September is shoulder season and I was there fairly early, the place was relatively empty. I did overhear a German couple enthusiastically singing German Happy Birthday to their son, Friedrich, over a cell phone. But for the most part, I was able to feel pretty alone. I love solitude in ancient places.

The highlight here for me was definitely the House of Thesues. I’ve had a soft spot for Theseus since being an extra in highschool in a local production of A Midsummer Night’s Dream. The mosaics here were beautiful, and I love the standing columns with the view of the Mediteranean behind them.

After this, I grabbed some ice cream and a beach nap (finally!). I’m going to do a separate post on my daytrip to Paphos, so I won’t go into detail here. If you’re wanting more history, there’s Kouklia nearby. Otherwise, you can start to partake in the other (much schlockier) side of Paphos.