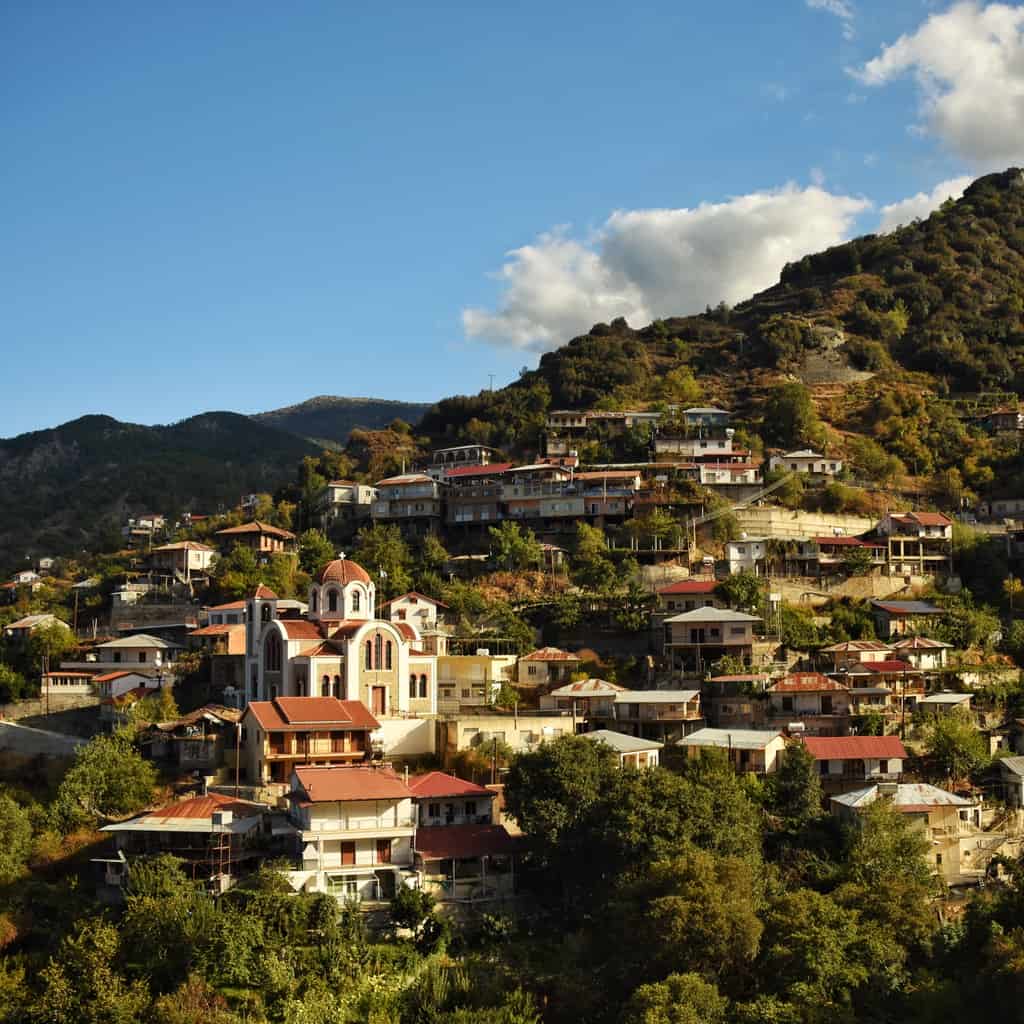 A winding mountain road trip. Being entrusted with the keys to a 13th-century chapel. Pulling over for cookies and ending up with dried apricots. My day hunting churches in the Troodos Mountains was one of my favorite days during my month in Cyprus.

The churches are not on any typical bus routes from Nicosia, so I decided to rent a car. I love driving in foreign countries whenever possible, and driving in Cyprus is incredibly easy. I fell in love with my little silver car and it’s preprogrammed Greek radio station (that would switch to Sia and Gaga at random). Even though they drive on the opposite side of the road from the US (thanks to their legacy in the British Empire), there’s so little traffic and such modern roads that it was a breeze. Once you get high up in the mountains, the driving becomes more difficult, but that’s because you’re on small mountain roads, and not because of the traffic or driving direction.

The painted churches are ten separate Byzantine churches and monasteries spread over the Troodos Mountain region in central Cyprus.

The Troodos mountain region of Cyprus contains one of the largest groups of churches and monasteries of the former Byzantine Empire…all richly decorated with murals, provide an overview of Byzantine and post-Byzantine painting in Cyprus and bear testimony to the variety of artistic influences affecting Cyprus over a period of 500 years. The structures display elements that were specific to Cyprus and were determined by its geography, history, and climate, including steep-pitched wooden roofs with flat hooked tiles, in some cases providing a second roof over Byzantine masonry domes and vaulted forms, while exhibiting Byzantine metropolitan art of the highest quality. The architecture of these churches is unique, confined to the Troodos range and almost certainly of indigenous origin. They range from small churches whose rural architectural style is in stark contrast to their highly refined decoration, to monasteries such as that of St John Lampadistis.

My first stop was the tiny Panagia Asinou, the northernmost of the painted churches. I was nervous when I saw there was a busload of tourists already there, but it emptied pretty quickly and the caretaker even left, so I was left alone to admire the beauty of the little church.

The church dates from the twelfth and thirteenth century, with many of the frescoes completed to 1105-06.

The original artist is believed to have been from Constantinople and the style of the artwork reflects the contemporary style in the capital. This makes the paintings one of the most important groups of Byzantine artwork from this period.

Of the three churches I saw, the paintings at Asinou were the most vibrant and intact. For more information about the history of this church, check out this entry from the Cyprus Department of Antiquities.

My next stop (after getting lost for about an hour) was a little roadside stand. The sign said they had cookies. Actually, it said they had “different kinds of cookies.” But that was a lie. What they had were these homemade nut candies and dried apricots. At that point, I was really hungry and trying to avoid stopping for lunch, so I bought more dried apricots than I’ve ever seen before (language barrier mixed with taking a little advantage of me for not speaking any Greek) and hit the road. They were delicious (and lasted a week).

Then I drove to the church. St. John Lambadhistis is a small monastery and museum in the central part of the Troodos region.

The dates of the buildings aren’t known, but it’s believed the monastery was founded around 1549.

The church, dedicated to St. Heraclidius, pre-dates the monastery, and the oldest frescoes are thought to date back to the twelfth century. The artwork is a combination of contemporary Byzantine styles with Cypriot folk art.

There is a small Byzantine museum on the property, which preserves and displays some of the older icons.

My last stop was the small 13th-century chapel in the tiny central Troodos village of Moutoullas. This was a magical stop. As I drove to the chapel, an older woman started calling to my car and asked me what I was doing. When I told her I was going to visit the chapel, she informed me that she was the caretaker and that she had closed it up for the day.

But then she said if I followed her to her house around the corner, she would lend me the keys so I could visit.

Holding the keys to a 13th-century chapel was exhilarating. Unlocking the door and stepping in by myself, completely alone, to wallow in the history of the tiny mountain chapel was a very special moment.

The church was the least well-preserved of the three I visited, and it was by far the smallest. Dedicated in 1280, the chapel frescos date to this same time. There are additions to the church from later centuries.

After spending exploring the church, I walked over to the contemporary Orthodox cemetery across the road before returning the key.

Of the ten churches that comprise this UNESCO site, seeing three in one day was pleasant. For me, trying to visit all ten would not have been an enjoyable day, but it would be possible to do over two days. Some of the churches do not have public hours and have to be privately arranged. I chose these three based on public schedules since the day I was touring was a public holiday in Cyprus, and I hadn’t bothered to try to arrange for any visits directly with the caretakers . I used this schedule, but I can’t vouch for its validity other than it was accurate for the three I visited on the day I went.

I couldn’t find a decent day tour from Nicosia (or any). I found three options: rent a car, hire a driver, or take public buses. I used the inter-city bus system constantly, but the schedule to get to the Troodos region didn’t get me close enough to any of the churches for me to be comfortable that I’d be able to make it work.

Provided the church you want to visit is open, there is no admission fee to get into the churches. Unless you’re an art historian or religious studies academic, I cannot imagine spending more than a half hour at each church.

Beyond admiring the artwork, there isn’t much to do at each site. Other than meals in local restaurants or wandering around the villages, there aren’t really other activities.

Pin This For Your Trip to Cyprus