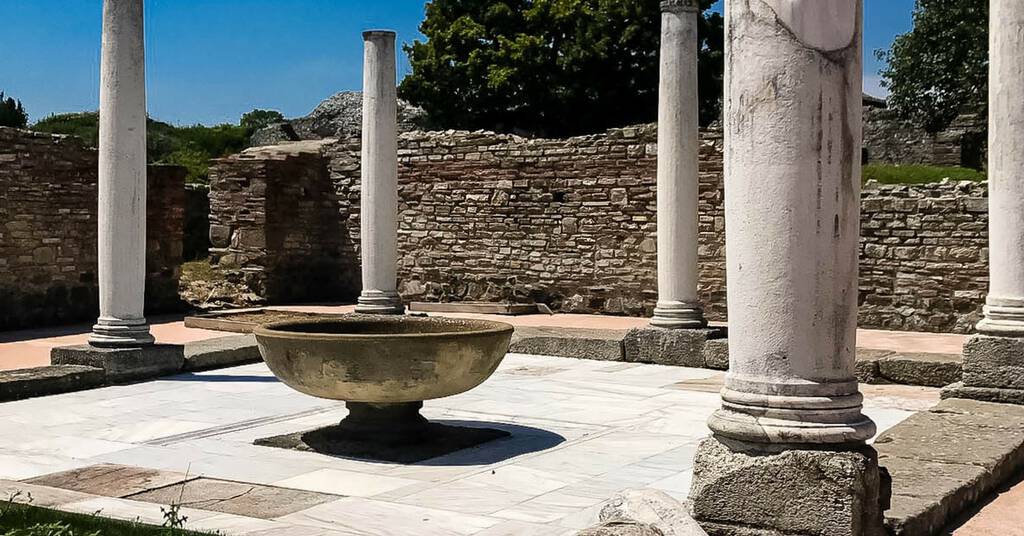 I had rented a car, looked up the route, and had done my research…but when the time came to wake up at 6am (after watching the Game of Thrones premiere at 3am), I couldn’t drag my tired a*** out of bed.

Don’t get me wrong, I love a good ancient Roman city as much as the next history fan, but I also love my sleep.

A few days later, on my last day in Belgrade, I got around to rectifying the situation. Since I’d already seen the other four Serbian UNESCO sites, I couldn’t miss this one. I hired a driver through my hostel (about 40 euros more than renting the car in the first place, but at that point, the price on a last-minute rental had skyrocketed). That’s how I found myself spending the day with a super cool Bosnian chick named Nikolina.

Typically, when I hire a driver through a hotel or hostel, the person who picks you up is a dude. They could be 20 years old or 80, they could speak perfect English or no English, but it’s always a dude. They may hit on you or be indifferent to you, try to sell you another trip, wait in the car while you go in or explore the sites with you, play local music or a top 40 station, drive  a car straight from the lot or an old beater, show you something you didn’t expect on the way or they may not even have heard of where you’re going.  But the one constant is that it’s a dude behind the wheel.

When Nikolina said she was the driver, a girl younger than me but someone I could definitely hang out with in real life, I was so pleasantly surprised. Sure, it’s common to get a chick as an Uber or Lyft driver, but how often are they the person that’s getting the gigs from the hotels or hostels?

Gamzigrad, also known as Felix Romuliana, is about 3 hours outside of Belgrade.  The actual site isn’t too large (an hour was more than enough to explore).  It was blazing hot–so hot the local stray dog was chilling inside the museum. There were a few other tourists there, but not too many (the heat probably keeping anyone who lived nearby away).

About Gamzigrad-Romuliana, Palace of Galerius

The palace was known as Felix Romuliana.  Emperor Galerius named the site after his mother. Emperor Galerius was born near Serdica (modern Sofia, Bulgaria) and was part of the first tetrarchy, headed by Diocletian.  After Diocletian stepped down, Galerius succeeded him as the Emperor.

Galerius built Felix Romuliana in what is now eastern Serbia, near the modern town of Gamzigrad.

The Late Roman fortified palace compound and memorial complex of Gamzigrad-Romuliana, Palace of Galerius, in the east of Serbia, was commissioned by Emperor Caius Valerius Galerius Maximianus, in the late 3rd and early 4th centuries. It was known as Felix Romuliana, named after the emperor’s mother. The site consists of fortifications, the palace in the north-western part of the complex, basilicas, temples, hot baths, memorial complex, and a tetrapylon. The group of buildings is also unique in its intertwining of ceremonial and memorial functions…

Gamzigrad-Romuliana is a Late Roman palace and memorial complex built in the late 3rd and early 4th centuries, commissioned by the Emperor Galerius Maximianus. The strong fortifications of the palace are an allusion to the fact that the Tetrarchy Emperors were all senior military leaders. The spatial and visual relationships between the palace and the memorial complex, where the mausoleums of the Emperor and his mother Romula are located, are unique.

Visiting the site, you can see the fortifications around the palace, a preserved mosaic, some remaining columns, and Magura hill.  This hill is where Galerius and his mother Romula underwent apotheosis after their deaths, the process by which a mortal ruler becomes a god. From the curator of the National Museum:

Like architectonic elements and sculptures, but much livelier, they tell a story of divine Galerius, representing the most powerful segment of a stage arrangement which is both over dimensioned and over saturated by details, crafted to represent a cosmic origin of an ideology. The whole arrangement of the stage is subjected to Dionysus – Galerius, who is in the leading role, while the mosaic representation of the God Dionysus is the essence of the complete architectonic and decorative conception of Romuliana: a divinized man enters into the realm of the immortals.

How to Get to Gamzigrad-Romuliana, Palace of Galerius

The buses from Belgrade are not convenient to complete the journey as a day trip, but it’s an easy open highway drive from Belgrade. The best three options for visiting:

If you choose to stay overnight, there is another museum where they keep the artifacts from the site, as well as a spa.