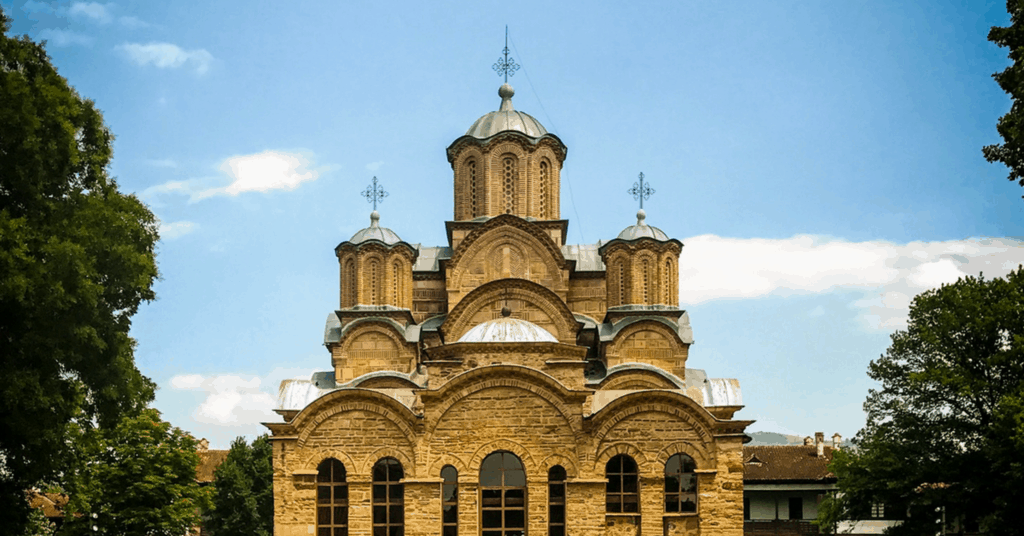 I visited Gracanica Monastery recently, as part of my six-week backpacking trip through the Balkans. Gracanica is part of the UNESCO World Heritage Site “Medieval Monuments of Kosovo.” This WHS is the only one in the country of Kosovo (although UNESCO lists it as part of Serbia since Kosovo isn’t yet recognized by the UN). The site is made up of four Serbian Orthodox churches:

I visited Gracanica, which is the closest to Priština, Kosovo’s capital. I’d read that visiting was going to be potentially difficult due to the nature of the Serbian/Kosovo conflict.  Because this is a Serbian religious site in Kosovo controlled territory, there were rumors that I wouldn’t even be able to get there because Kosovars wouldn’t help me find it or let me off on the public bus.

Well, none of that ended up being true for my trip. Traveling to Gracanica from Priština was very easy. I asked the receptionist at my hotel to arrange a cab ride, and she did so without batting an eye. The cab from my hotel and back cost 15 euros, including having the driver wait for me while I went in (about 30 minutes).

When I was there, it was a bright, sunny day. There was a caretaker giving an in-depth tour of the frescoes to some American military officers (more on that later), so I got to hear a little more about the artwork than when I visit these places on my own.

Unlike what I’d been warned, my visit was easy, pleasant, and uneventful.

Medieval Monuments of Kosovo – The Site

The official UNESCO description for this site is pretty weak.  This is the entire entry from the website:

The four edifices of the site reflect the high points of the Byzantine-Romanesque ecclesiastical culture, with its distinct style of wall painting, which developed in the Balkans between the 13th and 17th centuries. The Dečani Monastery was built in the mid-14th century for the Serbian king Stefan Dečanski and is also his mausoleum. The Patriarchate of Peć Monastery is a group of four domed churches featuring series of wall paintings. The 13th-century frescoes of the Church of Holy Apostles are painted in a unique, monumental style. Early 14th-century frescoes in the church of the Holy Virgin of Ljevisa represent the appearance of the new so-called Palaiologian Renaissance style, combining the influences of the eastern Orthodox Byzantine and the Western Romanesque traditions. The style played a decisive role in subsequent Balkan art.

The four components of the site are noted for their combination of eastern and western influences and their importance to Serbian history.

See also
How to Visit Gamzigrad-Romuliana, Palace of Galerius

According to the official guide published by the diocese, “Grananica distinguishes itself from contemporaneous churches…by the richness of its imagination and the beauty of its concept which are reflected in the calculated rhythmics and rising dynamics of multiplying the window openings, the double arches, the higher vaults…that rise one above the other in wave-like fashion, creating the impression of movement.”

“The King of Kings and Lord of Lords, the living and unapproachable light, who directs the heavens, rules the earth and governs the depths, who rules over life and death, ascended Mount Tabor, desiring to show the light of his divine glory to his disciples. Let us ensure that we too, of the utterly impoverished soul, heart, and mind, may arrive at the height of divine ascent, that we might behold the glory of our God.”

Excerpt from the Founding Charter of Gracanica Monastery, 1321

Gracanica was built in 1321 by King Milutin of Serbia, who ruled what was the richest Balkan empire at the time. He built many Serbian Orthodox churches in addition to patronizing churches in Thessaloniki, at Mount Athos, and in Constantinople.

The church has suffered damage at many different times over the centuries, including by the Turks in the 14th century and by Albanian Kosovar grenades at the end of the 20th century.

The overarching UNESCO World Heritage Site is listed as in danger because of the unrest in Kosovo in 2004 and the damage done to 35 Serbian Orthodox churches. During this period, another church in the UNESCO Site (Our Lady of Ljeviš) was directly assaulted. This is why NATO KFOR forces guard Gracanica and the other churches in the site as part of their duties in keeping the peace in Kosovo.

The monastery is currently the home to 24 nuns, who keep the tradition of Gracanica alive through Icon painting, beekeeping, and other artistic pursuits.

Fun Fact:  the monastery is the namesake for New Gracanica in Illinois, which is also architecturally inspired by the original.

How to Get to Gracanica Monastery

Since it is located only 9km outside of Priština, it’s pretty easy to get to from there. It’s also very accessible by car.

See also
Belgrade: The Rise of the White City

There is a public transportation option, but the people I know who’ve used it say that it was overly complicated and time-consuming. Going in a taxi is far simpler. My cost was 15 euros for the entire trip. If you are worried about explaining to a taxi-driver that you are wanting to go to a Serbian monastery, ask your hotel/hostel/restaurant to call on your behalf.

Kosovo is a very driveable country. If you are in a rental car, you can park outside the monastery for free. The roads into the city are good, and the highways are easy to navigate.