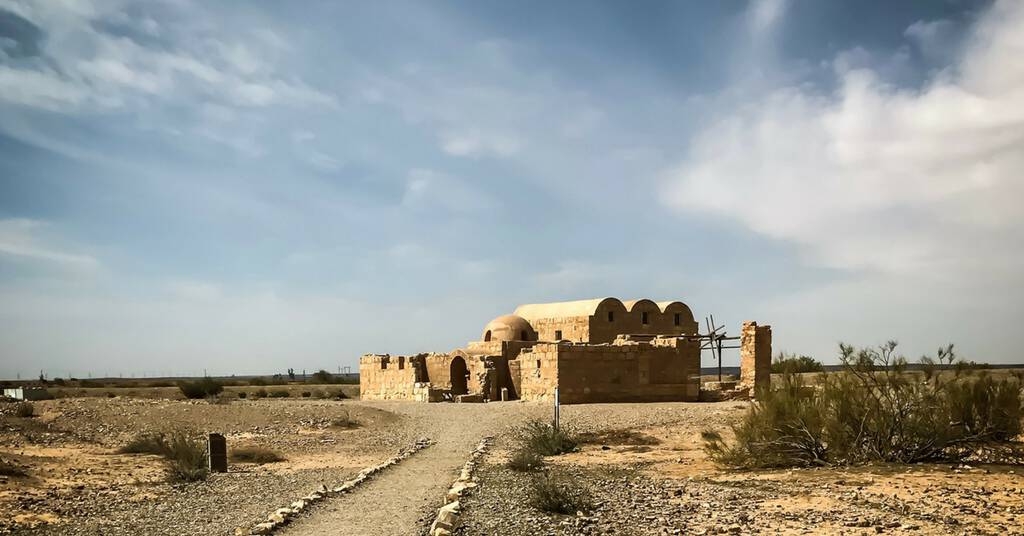 Part I: The Getaway

We made our getaway from the desert castle of Quseir Amra walking double speed. Me, talking under my break, trying to explain to my driver Sultan what the issue was without saying it loud enough for the tour guide Mubarak to hear. We were at hour six of what would become a sixteen-hour driver/drivee relationship, so I knew by now that what his English lacked in vocabulary it made up for in a general willingness to follow my lead. I don’t know if he understood what I was saying or why I was saying it, but he matched my speed and we pulled away from the lodge, leaving a blinking Mubarak behind.

I breathed a sigh of relief and explained again more slowly what the issue was, thankful we were pulling out of there.

I relayed to Sultan what had happened. The visit had been wonderful. Mubarak had been pleasant as he gave me a private tour of Quseir Amra, the eighth-century Umayyad hunting lodge, explaining how it worked and what had gone on there in centuries past. I could picture perfectly in my head where the caliph had sat on his thrown, my brain filled in the missing portions of the frescoes, and I could feel the ancient steam coming out of the now defunct, but once glorious, bath works.

But then the mood had changed. Back at the visitors’ center, I’d handed Mubarak the tip that Sultan had told me was the right amount. But instead of taking it and moving on, Mubarak’s eyes changed. They went blank, and then he stared at me with a sulking, steaming rage. The rest of his face remained plastered in the same exact spot it had been before.

The look made me aware of how remote Quseir Amra is, and how alone we were out on the plane. I thought about the highway signs we’d passed on the way, counting the kilometers to Iraq and Saudi Arabia. I was standing in a part of the world I didn’t understand, with every possession I had in the country in a backpack on my back, miles from safety (should I need it), with an iPhone charged 10%.  And now an (admittedly very short) Jordanian man was staring at me as if I’d robbed him.

My stomach turned. Not out of real danger, but out of the chaos of it all.

That’s why I was so grateful to Sultan when he understood my actions, if not my words, and hightailed it out of there with me.  I was thankful he was driving me away from the angry man and towards our next stop.

Except after two minutes, he stopped driving. He pulled the car over to the side of the highway and picked up a hitchhiker.

This is a thing taxi drivers do in some parts of the world–pick up another fare mid-trip if the destination is on the way. Why not get more money, right? I didn’t love it, but I tolerated it. How do you tell your driver not to pick up the college girl in the pouring rain whose stop is on your way? Or the woman who just needs to go a mile from the bus station, when you’re going forty? It’s harmless.

But this felt different. Sultan and this man argued in Arabic, and then the man climbed in behind me. We got back on the highway. I glanced at Sultan, but he stared at the road without offering me an explanation.

Either everything was fine or we were being kidnapped in the Jordanian countryside. The odds felt fifty-fifty.

I plugged my phone into one of my portable batteries, silently willing it to a full charge. I stared at the road ahead of me. I memorized highway signs. I promised myself that if everything was fine, I would finally do what I should have done after Ecuador, and learn what to do if you’re being kidnapped. And also, more importantly, how to tell if you’re being kidnapped.

Twenty minutes later, Sultan pulled over on the highway and pointed out an ancient-looking building, telling me to get out and take a picture. The sign said this was Qasr al-Kharrana another of the desert castles.

I followed Sultan’s instruction. I thought about running away into the desert. Then decided against it, as I would probably die out there. And if our tour was continuing, what kind of kidnapping was this?

I did seize the opportunity to snatch a picture of the man in the backseat, in case police ever needed a description.

Another half-hour later, and Sultan pulled over. The man got out. He didn’t pay any money for the near hour-long ride. Sultan still offered me no explanation, but since I wasn’t being kidnapped any longer, this seemed less urgent.

We had a long itenerary for the rest of the day planned. I thought about saying something, requesting no more hitchhikers. Or maybe just explain to me what’s going on so it doesn’t seem to be the stuff of hostage movies. But I didn’t.  When he asked me if he could smoke a cigarette on the road, I nodded yes.

My time in Amman, the capital, felt like I could have been in any country. Beautiful, distinctly Arabic, but a place more similar to other capitals than to its countryside. A city built on order and rules. I felt at home there, instantly. Quseir Amra was my first taste that the rest of Jordan might not be so tame.

Everyone says Jordan is safe, and I was always safe. But it’s also a little wild, chaotic. An edge of anarchy. A place where kings aren’t perfunctory, they’re a necessity. Where all the countries around it are troubled.

Middle Eastern politics aren’t exactly my bag, but this sounded right, like the distilled essence of two decades of regional chaos. Or two centuries. Or two millennia.  The equations basically unchanged since twelve-hundred years before when the Umayyads had ruled from Damascus and come to Quseir Amra on hunting holidays.

This was my first real-world introduction (I believe) to Umayyad architecture. Clearly the inheritors of Roman and Byzantine style, the paintings seemed so familiar.

Built in the early 8th century, this exceptionally well-preserved desert castle was both a fortress with a garrison and a residence of the Umayyad caliphs. The most outstanding features of this small pleasure palace are the reception hall and the hammam, both richly decorated with figurative murals that reflect the secular art of the time…

The extensive fresco paintings of the bath building and reception hall are unique for Islamic architecture of the Umayyad period. The wall paintings show influences from classical pagan themes, Byzantine style portraits and hunting scenes, depictions of animals and birds, and are accompanied by inscriptions in Greek and Arabic. The representation of the zodiac on the domed ceiling of the caldarium (hot room) is one of the earliest known, surviving portrayals of a map of the heavens on a dome.

How to Get to Quseir Amra

From Amman, I took a taxi on an all-day trek from Amman to Petra. Quseir Amra (alternatively Qasr Amra or Qusayr Amra) being 50 miles east of Amman and further north (closer to Azraq and Madaba) this route only made sense due to my time crunch and my UNESCO fetish. For a normal person, it would make more sense to see it while staying in Madaba or visiting the Dead Sea. It’s  included on itineraries of the ‘Desert Castle Loop,’ but I wanted to pair it with another UNESCO Site (Um er-Rases) instead of more desert castles.