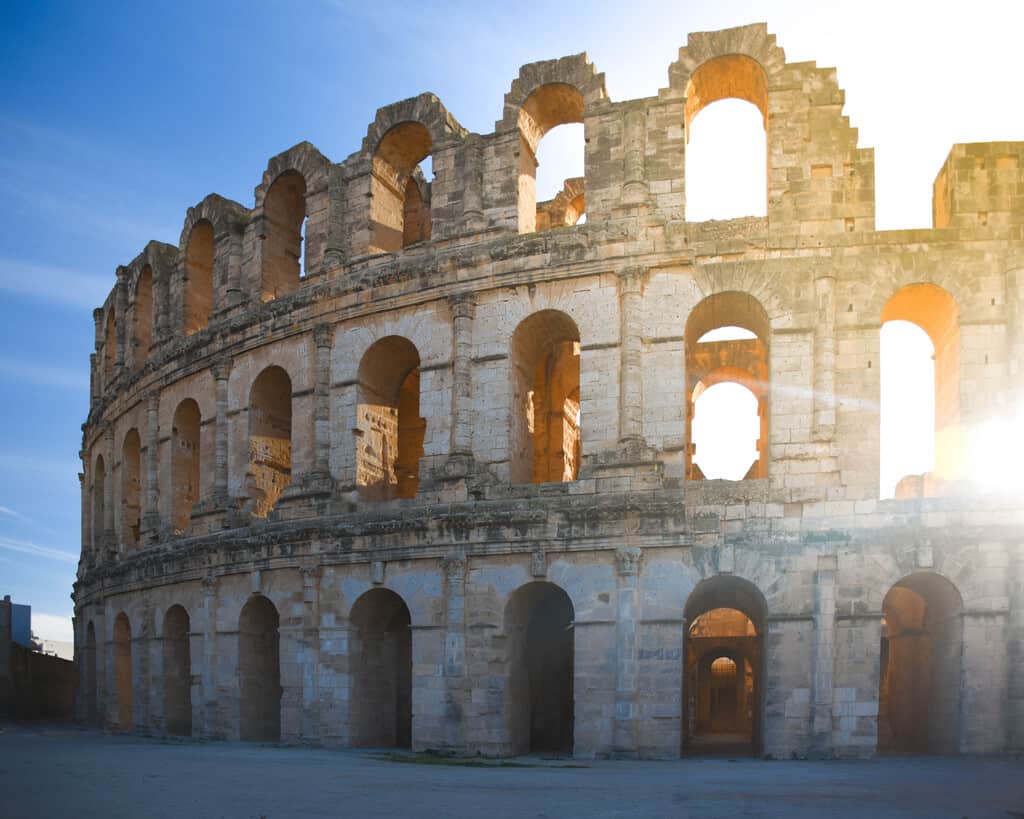 Are you planning a visit to El Jem, the beautiful ancient Roman amphitheater in Tunisia? Here’s everything you need to plan you visit, plus important El Jem tips!

Good to Know: This guide to visiting El Jem comes from Julie from Julie Around the Globe on the UNESCO World Heritage Site the “Amphitheatre of El Jem” in Tunisia.

It includes everything you need to know to plan your visit.

See below the post for a few of my Tunisia travel tips!

What is the Amphitheater of El Jem?

El Jem, in Tunisia, is one of the best examples of Roman architecture in Africa. This amphitheater, built 150 years after the one in Rome, is the third-largest coliseum left in the world. The amphitheater of El Jem has been a UNESCO world heritage site since 1979 and one of Tunisia’s highlights.

This colossal amphitheater could host up to 35,000 spectators and also served as a cistern to collect and distribute rainwater. Today, it is incredibly well preserved, only a small part of it have been destroyed. You can go up the benches and down to the underground sections to visit the passageways and cells.

Tunisia is not a touristy country, and you’ll quickly realize it visiting El Jem. The amphitheater is as majestic as the one in Rome, yet you might have the place all to yourself. I was there during high season, and only about ten people were visiting at the same time as I did.

El Jem Amphitheater’s architecture is a blend of different techniques and styles. The proportions were influenced by the Punic architectural style, the materials used, by the African style (build without bricks), and the rest of it is mostly influenced by the Corinthian style. The amphitheater has an elliptic shape and was made using golden sandstone.

It might seem strange at first to find such a magnificent structure in such a small village in the middle of nowhere. Still, El Jem used to be one of the wealthiest cities in North Africa during the Roman Empire. At the time, the town was called Thysdrus and was an important commercial crossroads.

El Jem Amphitheater was built at the beginning of the third century to collect water and entertain the many visitors that came through the town. Showing so much wealth attracted attention from Rome and the emperor Maximin, who then decided to increase taxes. The landlords started protesting and attacked the Roman Procurator in 228. In response, Rome sent troops with orders to destroy El Jem. From then on, the city began to decline and loss of its importance.

El Jem Amphitheater has seen many battles and historical events, as you can guess looking at the parts that are in bad shape. In 693, Kahena, the Zenete Queen, famous for having succeeded in federating the Berber tribes, took shelter inside the amphitheater with her army. In 1695, Mohamed Bay’s army, pursuing Ali Bay’s supporters who had taken refuge in the coliseum, destroyed part of it.

Later on, locals used materials from the amphitheater to build their houses. El Jem Amphitheater only acquired a protected status in the 20th century when restoration work started.

What I loved more about my visit to El Jem Amphitheater was that it was almost empty. There must have been something like ten more people visiting the site when I was there (during high season). I have been to the Coliseum in Rome, they both are spectacular, but I preferred the one in El Jem because you get to experience it without hoards of tourists.

I would advise going there around closing time, so you can experience the sunset. The light at this time of day creates a magical atmosphere. It’s also the best time to take pictures.

The only thing that didn’t go well for me wasn’t about my visit but rather about not being able to leave El Jem. I had arrived pretty late in the afternoon from Sousse, and I was planning on going directly to Sfax after visiting the amphitheater.

Once I arrived at 4 PM, I was told I had just come with the last louage (Tunisians will tell you there are louages all the time, that’s obviously not true) and that I’d have to take the train. I checked at the train station, the next train to Sfax was at 9 PM. I went on with my visit, had dinner then went to the train station. I was told the train was late and they had no idea when it will be coming. I started feeling unease, waiting in the middle of the night in rural Tunisia is not the best thing for an unaccompanied woman.

At 11 PM, the train still hadn’t arrived, and it started pouring rain, and the train station was closed, I had to wait outside. Fortunately, it didn’t last long, so I was back to waiting. Other people were there too, waiting for the train.

At midnight, I had given up on the idea of the train ever coming when one of the men waiting, told me his friend from Sfax was coming to pick him up and that I could go with them. I jumped on the occasion, turn out they worked with the girl I was going to couch surf with, and they dropped me off safely at her place.

I later found out that the train wasn’t late but that it had derailed, I have no idea why the man working at the train station kept telling me it was coming when clearly it couldn’t.

Two lessons learned from this: 1- never trust people about public transportation’s schedule unless they live there or go frequently and 2 – don’t take the train in Tunisia.

Things to Do in El Jem and Nearby

In El Jem, you should definitely visit the museum. It’s a 15-minute walk from the amphitheater and is included in your ticket. The museum features artifacts and mosaics found in El Jem and the province.

Walking along the train tracks, you’ll find a smaller amphitheater. It’s mostly in ruins, and no one maintains it.

El Jem is located between Sousse and Sfax. Both have Medinas worth visiting. Medina refers to the historical center, fortified cities built by the Arabs during their conquest of North Africa.

The Medinas in Sousse and Sfax are UNESCO world heritage sites too. The one in Sousse is more spectacular, but the one in Sfax is more authentic as Sfax is less touristy.

In the area, you can also visit Monastir and Mahdia, especially if you’re there during summer and want to spend some time at the beach.

It takes around an hour to visit the amphitheater, but you can easily spend more time there. Add half an hour for the museum.

El Jem is pretty small, and the amphitheater is close to the train station and to where the louages (minivan serving as public transportation) arrive. You can walk to the amphitheater and the museum. You can arrive either from Sfax or Sousse.

English is not widely spoken in Tunisia, especially in rural areas like El Jem. The official language is Arabic, and most people speak French;

Some parts of Tunisia are not safe, El Jem is not one of them, just be careful with your belongings, and you should be fine;

If you rent a car, it’s easy to drive to El Jem, the roads are In okay conditions, just keep in mind that Tunisians drive like madmen, so if you drive too slow, you’ll be the one driving dangerously as they except everyone to drive like madmen. Also, only rent a car from franchised shops and take pictures of the vehicle before leaving;

There’s a hotel there if you want to spend the night, but I wouldn’t recommend it as there’s not much to do in El Jem.

During summer, Tunisia can get pretty hot, so bring a hat or cap, and don’t forget to apply sunscreen and to stay hydrated. Winters are not super cold, but it can get windy.

They often organize events inside the amphitheater, so try to check beforehand if something is going on or not. If there is a concert when you get there, it definitely won’t be the same.

Julie has been traveling full time since 2016 and is always on the lookout for great destinations and travel hacks. She shares her best travel experiences on her blog Julie Around the Globe and aims to inspire others to travel more and to places less known. You can also follow her on Instagram.

What to Pack for a Trip to Tunisia

Lonely Planet Tunisia which is available as a paper copy or in a Kindle edition.

Mosquito Repellant is the single most important thing you’ll want on you as soon as dusk hits. Have enough to at least get through the first night.

Full-Sized Travel Towel This is the best travel towel in the world. It’s pretty enough for the beach, large enough that you forget it’s a microfibre towel, and quick-drying so you only need to have one beach towel for the trip.

Sunscreen so that you don’t have to worry about finding it for one of the first few days of your trip. I found it to be more expensive in Tunisia than at home.

A GoPro for underwater and action photography. Why go all the way to Tunisia and not be able to capture some of the most exciting parts of your beach trip?

It’s a good idea to always have a valid travel insurance policy before you travel someplace like Tunisia where you’ll be doing activities and spending time outside. It’s just a fact that accidents can happen on the road, and you don’t want them to ruin your trip!

I pay for World Nomads, and I happily recommend them. It’s especially important to consider getting travel insurance when you’ll be doing any outdoor activities (like…ahem…going to the beach…).

I have been a paying customer of World Nomads for travel insurance for three years, and I happily recommend them.  It’s an especially good idea to consider getting travel insurance when participating in outdoor activities in foreign countries. Even in the cities, though, you’ll be happy if you’re able to replace your stuff if it’s lost or stolen or have help with any medical bills.

>>Get a travel insurance quote for your trip.<<

Pin this Guide on How to Visit El Jem, Tunisia for Your Trip!