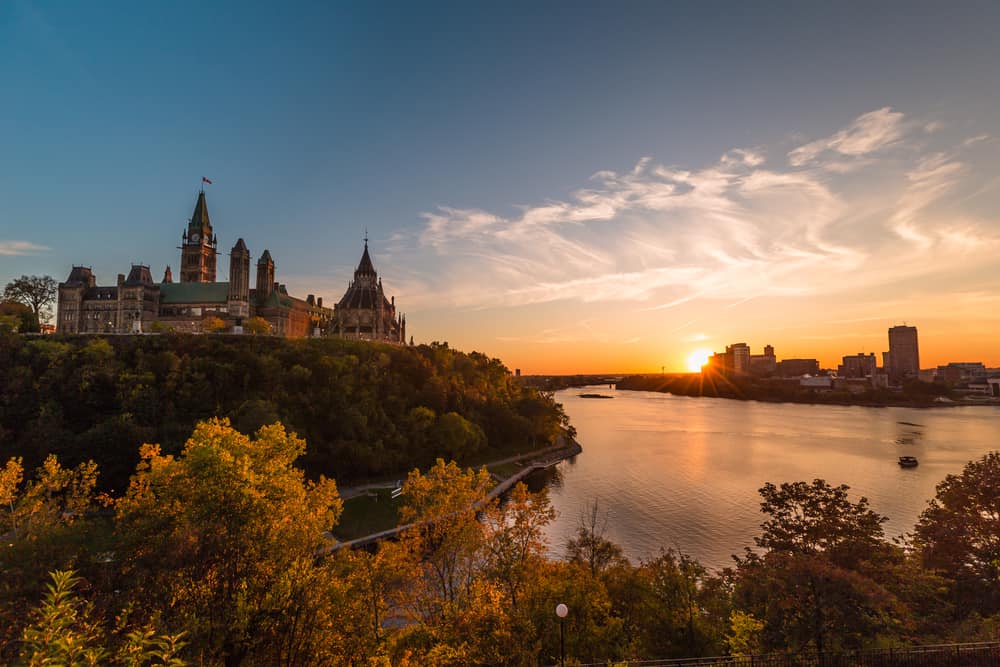 Looking to take a visit to the Rideau Canal in the capital of Canada? Here’s all the information you need on how to get there and the best activities to do from a local!

(This is a guest post by Monica from Ahlan Monica about her trip to the UNESCO World Heritage Site the “Rideau Canal” in Ottawa, Ontario, Canada, one of Canada’s historic landmarks).

Don’t have time to read now? Pin for later!

What is the UNESCO World Heritage Site of Rideau Canal?

In the relatively small, sleepy but oh-so-instagrammable government town of Ottawa, is the UNESCO heritage site, the Rideau Canal. In the Canadian capital city is where you’ll find one of the key icons of the country. The canal as locals often refer to it, passes through Ottawa and connects us with Lake Ontario and the Saint Lawrence River in Kingston – bringing it to over 202 kilometers in length!

Something to add to the significance of the Canal’s impact on the city, is that actually Ottawa isn’t the cities original name! Ottawa was originally called Bytown after the engineer of the Rideau Canal. It was later renamed by the Queen to Ottawa, which in Algonquin means ‘to trade’.

Today it’s hard to imagine that the canal was originally built in a tumultuous time as a military precaution to protect against a potential US-led invasion. After its completion, the canal then had a significant impact for steamboat transportation which provided a means for easier immigration and the creation of trade routes into the region. While thankfully the canal never had to live up to its intended purpose, nevertheless today it brings a variety of activities to the residents and visitors of the beautiful city I’m lucky to call home!

What makes this canal so special is not only it’s historical significance but also the fact that it’s the oldest canal (and best-preserved) still in operation in all of North America. It’s also incredible to know that many of the locks are still opened manually by the original hand cranks that were built at the time of its creation.

The canal is an attraction that can be explored in many ways and also as a bonus, year-round. Whether you’d like to learn about its history, explore the water canals or along the banks, there are many ways you can experience it for yourself! It has become a fascinating mix of historic charm with modern-day attractions and conveniences.

Winter activities on the Rideau Canal

If you’re brave enough to visit the Great White North in the wintertime, you’ll be rewarded with quite the unique experience. Usually in about late January/early February, when the temperatures get to their lowest points, the canal transforms itself into the world’s largest (and second-longest) skating rink in the world!

There’s really nothing like the feeling of the brisk cold air as you skating along a huge rink weaving in between newbies learning to skate or having young toddlers skate faster and better than you! The best part comes as you get to enjoy a local delicacy, a beavertail, which was founded in Ottawa in the 70’s. The sugary deep-fried dough has many topping options and if it’s your first, it certainly won’t be your last!

If you need to take a break indoors, take a stop by the ByTowne Museum to hear the inspiring and tragic stories behind this historic landmark.

Summer activities on the Rideau Canal

The summer months, in particular, bring out a whole other side of the Canal, when it begins operating yet again allowing passage for boats. Impressive to think it’s been in operation since the 1830’s!

See also
13 Steps to Flawlessly Planning a Trip to Canada

While I would highly advise against swimming the canal (it has a reputation for not having the cleanest water) there’s still a ton of activities you can enjoy both in and alongside the canal. In the canal itself you can rent kayaks, canoes, SUP boards or even go on a boat tour and spend a few hours exploring the city by water. Taking the canal in from the front-line is a great way to uncover some unique areas and if you’re lucky you may even see some ducks and fish along the way!

If you are water averse, there are paths that go along the canal banks that are perfect for taking a walk, a run, a bike ride or even rollerblading. In the summer there are a few pub-style restaurants that pop up along the canal and you can grab a bite to eat there, or bring a blanket and have a picnic in the coveted shade.

You can even head to Rideau Street by the Fairmont Chateau Laurier where you’ll be able to watch the magic of the locks as the water levels rise and fall carrying their passengers ever so slowly through.

Things to know before visiting the canal

As an Ottawa native, I visit the canal on a regular basis, whether it’s for my annual skating trip or to take in look at the locks in the summer. The canal is in the heart of the city and passes through many core areas, so as a visitor it’s hard to miss.

I have many favorite memories on the canal, including where I first learned to skate! I spent many winters eating much-deserved beavertails after freezing 7-14km skates!

As you know by now, the canal is quite long, the most popular parts of the canal in Ottawa are:

Winter tips: The canal is usually open only for about 25-35 days each winter season, and it’s entirely weather dependent. Be sure to be safe and if you aren’t a comfortable skater, take extra precaution as it can get busy and the ice is not completely flat and even. It should also go without saying to make sure you are dressed properly!

Summer tips: There can sometimes be an um… smell in the summer coming from the canal in certain spots. Like I’ve said, it doesn’t have a good reputation when it comes to clean water, just to keep in mind so it doesn’t catch you off guard. It also is an open area with not too much shade, it does get warm in the summertime, so be sure to practice good sun safety!

There’s no specified entrance and as such there’s no fee to visit. The costs for activities vary. If you visit in the winter and chose to skate, there are rentals available and cost about $20. If in the summer, there are many free options or you can rent a kayak, a solo kayak runs about $16/hour.

How to get to the Rideau Canal

While relative to cities like Toronto and Montreal, Ottawa is small in comparison, it’s still a charming place to discover! If you’re looking to stop in Ottawa from one of those neighboring cities, you can easily travel by car, bus or train. If you’re coming from Montreal, it’s about 2 hours away or Toronto is 4.5 hours away, either one would be less than an hour to fly in from.

Getting around Ottawa is also simple! The downtown core itself isn’t huge and is very bike and walking-friendly (of course weather depending). Otherwise, the bus and soon to be opened train system is convenient to get around all the more popular stops.

5 Other things to do around Ottawa

Our small city of Ottawa, with just over a million people has no shortage of activities to do! As the political centre of Canada, home of the Canadian Parliament, and yes ladies, Justin Trudeau as well. It’s a growing and rapidly expanding metropolitan city with lots of natural green space, cultural diversity and a rich history.

No matter where your interest lies, it’s likely that there’s a museum in the city for you! There are over 7 museums in and around Ottawa which includes War, History, Nature, Art, Aviation and more! Ottawa is home to 7 of Canada’s 9 national museums and everything from the exhibits to even the buildings themselves is truly world-class!

Shopping at the Byward market

Also known to locals at ‘the market’, this is the heart of the city where you’ll find loads of cute food stalls, artisanal shops with a dose of the occasional impressive street performer. There’s a unique mix of cuisines that will satisfy even the pickiest of eaters and if all else fails you can try a beavertail (or have seconds or thirds)!

Day at an outdoor spa

A perfect activity regardless of the time of year (yes, even in the harsh Canadian winter) is a trip to the Nordik spa. This place is truly an oasis and is a beloved spot by locals. You’ll have to take a trip across the bridge to Quebec, but it’s a short 30-min drive from downtown Ottawa. Immerse yourself in the natural water springs and get adventurous by moving between the cold baths and the warm waters and saunas for a truly relaxing experience.

Have tea in a castle

While it’s not an actual castle, it certainly looks the part! It had been on my bucket list for many years and last year I finally got the chance to experience  tea time at the beautiful Fairmont Chateau Laurier. It’s the perfect afternoon activity where you can dress up a little and feel like royalty. The hotel itself is another landmark of the city and worth visiting in and of itself. If you don’t believe me, this is usually where the Queen stays when she comes to visit, and I’m sure she’s got good taste!

See also
The 27 Most Beautiful East Coast Lighthouses & How to Visit Them!

See the Parliament at work

Much like the Rideau Canal and the Chateau Laurier, the Parliament is another key symbol of the city, if not the most recognizable one. The Parliament building bears a striking resemblance to Big Ben in London with the clock peace tower. It’s interesting to know that no buildings in the area can be taller than the Parliament, so when you take a venture to the top, the views you get of the city are truly unparalleled. In both the summer and winter months there is a sound and light show in the evenings that also tells some interesting historic tales of the city.

So Should You Visit Rideau Canal and See Ottawa?

I truly believe Ottawa is the most underrated capital city in the world, and the Rideau Canal is just one example of the unique historic landmarks that embodies this beautiful city. Whether you are a history buff, a nature lover, foodie or adventure enthusiast, the city will charm you into coming back!

Monica is the writer behind Ahlan Monica, a travel blogger who splits her time between Ottawa, Ontario, and Cairo, Egypt. You can learn more about her adventures on Instagram and Facebook.

Pin this Guide to Visiting Rideau Canal in Ottawa, Ontario