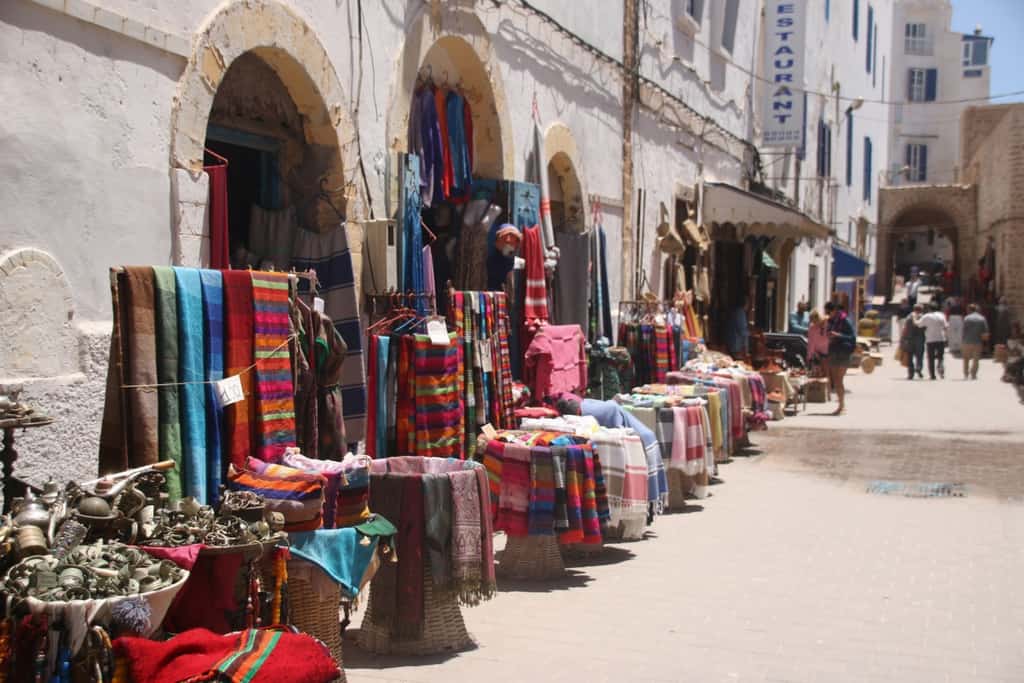 Morocco made it on Lonely Planet’s list of places to visit in 2020 and one of the most beautiful, but underrated cities, is Essaouira. It is located on the Atlantic coast, about 3 hours driving from Marrakech, making it the perfect destination for a day trip or a few days stay!

(This is a guest post by Eva from Not Scared of the Jetlag about her trip to the UNESCO World Heritage Site the “Medina of Essaouira (formerly Mogador)” in Essaouira, Morocco,, one of Morocco’s historic landmarks).

Don’t have time to read now? Pin for later!

What is the UNESCO World Heritage Site the Medina of Essaouira?

I have been in Essaouira twice for a week each, and I haven’t been bored for a minute. The city is very lively, and the medina is still a place where the locals live and shop. Of course, there are some touristy places as well, but compared to the medinas of Marrakech and Fez, it feels much more authentic. It is a lot of fun to watch the locals go about their daily business in what looks like a medieval town. So if you ever wanted to time-travel, maybe consider a visit to Essaouira.

What is a medina you ask? In Morocco, the word stands for the old part of the city, most times still confined by a wall with multiple gates. Inside, the streets are narrow, cars don’t fit and mostly motorbikes are prohibited also. So you will find horse-drawn carriages, donkeys, and bicycles as the main form of transportation.

According to the UNESCO world heritage list, the Medina of Essaouira (formerly Mogador) is “an exceptional example of a late-18th-century fortified town, built according to the principles of contemporary European military architecture in a North African context.”

A Brief History of the Medina of Essaouira

So let’s start with a bit of history. There are archaeological findings indicating there have been settlements at the site of today’s Essaouira even in prehistoric times. During the reign of the Roman Empire, the locals exported purple dye, found on the small islands just off the coast, to the Romans. It was used to dye the robes of the Roman senators at the time.

A few centuries later it became the key place connecting Europe with the western parts of Africa. It was an important door into the continent, enabling the trade of western goods (e.g. weapons, cotton and sugar) in
exchange for slaves, ivory and gold.

The Portuguese established Essaouira as a stronghold by building the fortress that is the foundation of the city you see today. The Skala (the thick walls facing the ocean) and the ramparts (walkways on the Skala lined with canons) are an impressive sight and mostly still intact.

The city as you see it today was built in the second half of the 18th century by Sultan Sidi Mohamed Ben Abdallah as a royal port town. He hired Europeans to design the new look of the medina which explains why contrary to the other Moroccan medinas, it has a proper layout. There are mostly straight main roads with smaller ones crossing at right angles, making it much easier to navigate on your own.

These days it is still an important fishing town with a big fish market, but the big container ships go to Casablanca or Tangier.

Things to Do at the Medina of Essaouira

Most tourists visit Essaouira on a day trip from Marrakech, but I think you should spend at least 2-3 days there. There are so many things to see and do in Essaouira, inside the medina and out, I promise you won’t get bored!

The best way to explore is by just getting lost in the narrow lanes, watch people go about their daily business and drink some tea in one of the many cafés. But, if you are uncomfortable walking around on your own, you can easily find a guide for a 2-hour tour of the city.

Make sure to make your way up to the ramparts, the most impressive part of the old fortifications, also called Scala de la Kasbah. There are dozens of old cannons from the 16th century to the early 18-hundreds lined up, pointing out over the Atlantic Ocean. If you watched Game of Thrones, this sight might be familiar.

Another place that is not to be missed is the Scala du Port, located outside the city wall but part of the old fortifications. It is a great spot for watching the sunset and taking photos of the medina.

The sight of the city walls defying the power of the Atlantic ocean for centuries is very impressive. It is also a very pretty sight with the white-washed houses with blue window frames behind the ocher walls surrounding the medina. To get up onto the walls and into the tower, you will have to pay a 60 MAD entrance fee. The door is located on the medina facing side of the wall right next to the gate to the fish market.

Which leads me straight to the next thing on your to-do list, the daily fish market. I encourage you to buy some fresh fish right there. They will clean it for you, and you can take it into the smaller restaurants in the medina to have it grilled or fried at a much better price than in the touristy restaurants. You will only pay a small fee for the service and maybe for the bread, salad or tea, you might order with it. You can get fish for 2 people for as little as 80-100 MAD (8-10€) with a bit of bargaining and can expect to pay another 30-50 MAD for the restaurant.

If you are up for a little bit of history and culture, I recommend visiting the Museé Sidi Mohammed Ben Abdallah. It is small but offers interesting insights into the geography of the area, the history of Essaouira and interesting cultural artifacts such as Berber jewelry and traditional instruments. Also, the building is very pretty with a huge stairway leading up to the second floor. The entrance fee is 70 MAD (ca. 7€).

If you plan on going in June, you are in luck, the Gnaoua music festival will be held in Essaouira. Gnaoua music is very specific to Morocco and has a long history. The Gnaoua are descendants of Berber slaves from more southern parts of Africa, e.g. Senegal, Ivory coast, etc. They preserved parts of their culture, especially the music, that is now famous beyond Morocco.

If you are staying overnight, spend the evening in one of the roof-top cafés around the main square of the city, Place Moulay Hassan. You will have fantastic views of the sunset over the Skala du Port and most evenings there will be live music.

If you are interested in buying some local goods, Essaouira is the place to stock up on Argan oil, Amlou (the Moroccan Nutella) and small woodcraft items. There are plenty of small women cooperatives selling Argan products in the medina, especially around the crossing of the main street with the road coming from Bab Marrakech. The prices are similar between them, but it is always good to shop around a bit.

For wood items, there are lots of shops around the Skala de la Kasbah and if you haggle a little you will get good prices. Of course, you can also buy carpets, shoes and other leather goods here too. The advantage of shopping in Essaouira vs. Marrakech is, you get way better prices even before you start haggling. And, the shop owners don’t hassle you as much, you can just enjoy yourself looking around for a bargain.

Things to do Nearby

Go surf! Just outside the medina, there is a wonderful beach that goes on for kilometers. Essaouira is also called “the windy city” as it is pretty windy all year round, so the city became a hotspot for surfing, windsurfing, and kitesurfing. There are plenty of places offering lessons including the necessary equipment. Part of the bay is protected by a small island, so you can always find a place with smaller waves for beginner classes.

Go to the beach! During the summer months, Essaouira is swarmed by Moroccan tourists escaping the big cities and you will find them all at the beach. The water is very shallow so it is ideal for children. If you are looking for an empty beach, you will have to go for a little walk. The more south you get, the fewer people are there and you can relax and enjoy the waves.

Go for a ride! You can rent a horse for an hour or 2 and gallop along the beach to your heart’s content. Alternatively, you can go for a camel ride, but to me, this feels out of place at the beach, so if you plan to go to
the desert, go camel riding there.

Take a half-day trip! If you want to venture a bit further, take a taxi to Sidi Kaouki, a small surfing town around 25 km to the south. Here you find fewer people on the beach, bigger waves and some small but very clean restaurants to enjoy a seafood lunch.

My favorite parts of my time in Essaouira are mostly connected to eating! I love the fresh fish and seafood, and my favorite restaurant to get them prepared is called Chez Fatima, just off the road from Bab Marrakech close to the center of the medina. Also, when I crave some European food, I go for Italian food in a restaurant called Taverna Bolognese da Maurizio. They have great pizza, homemade pasta and the best Tiramisu I’ve ever had (and that includes plenty in Italy)!

A non-food favorite is sitting in either Place Moulay Hassan or on the square in front of the clock tower and listen to local musicians playing in the evenings. There are vendors selling freshly squeezed orange, pomegranate or sugarcane juice, which make for a nice non-alcoholic sundowner drink.

From Marrakech or Casablanca, you can go by public transport, Supratours and CTM both have multiple connections per day. The cost for a one-way ticket from Marrakech is around 80 MAD (ca. 8€) and it takes around 3 hours to get there. From the bus station, it is either a short walk or a quick taxi ride. The shared taxis cost around 10 MAD per ride, no matter the distance and they will just pick you up on the road if you wave at them.

There is a local airport, but at the moment the only international flights arriving there are from France. But you might be able to get a good deal on a flight from Fez, saving you a lot of travel time.

As the UNESCO site is pretty much the old town itself, you don’t have to pay any entrance fees other than to the museums.

Eva is blogging at Not Scared of the Jetlag. She focuses her travels on Morocco and the Middle East and is a big advocate of slow and immersive travel. You can follow her on Instagram at where she posts travel
photos and stories of daily life in the desert of Morocco.

Pin this guide to visiting the Medina of Essaouira for your trip!