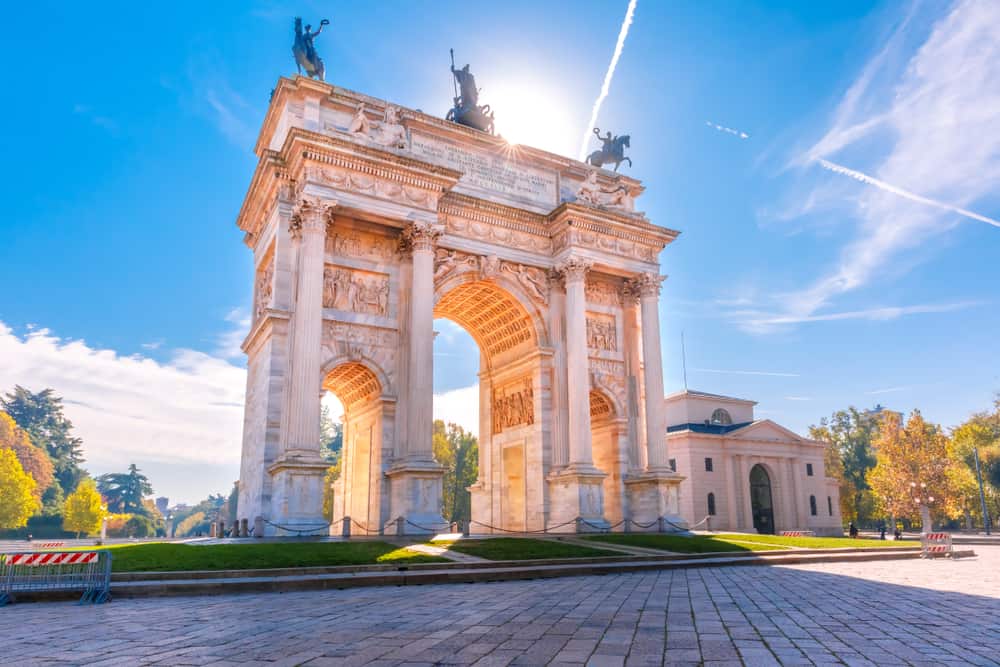 Before you dig into all the city has to offer, you should know that these are the most popular guided tours, attractions, day trips, and skip-the-line tickets in Milan.

1. I have gone through a lot of things, everything that you can imagine in life, but the best has been Gerard and Milan. –Shakira

2. Frankly, Milan kind of sucks as a restaurant city. It’s so fashion-obsessed that people don’t pay that much attention to the food. –Joe Bastianich

3. Milan is marvelous, picturesque, and full of elegance. –Wesley Sneijder

4. I grew up in Milan during the golden age of designers. There was fashion all around. –Fabio Lanzoni

See also
17 Marvelous Things to Eat in Milan: Food & Drinks Not to Miss!

5. I love Milan, and I’m not just saying that. It’s a city that gives me a great sense of euphoria. I can’t explain why, but I feel a special energy there. –Shawn Mendes

6. Milan, for me, is a city of discovery. You can find some amazing gardens behind some great houses; I also love finding beautiful galleries and incredible shops, but you have to explore. And the food is amazing. –Francisco Costa

7. I’d never stop traveling, and I love bringing my family along with me. My children have points of reference everywhere, friends from Milan to Los Angeles. I think it’s really fun for them. –Valeria Mazza

8. Milan is a true metropolis: strong and fearless but welcoming, too. Little by little, I came to realize that I could become someone here. –Giorgio Armani

9. Unlike Milan, Italy’s banking capital, or Rome, its religious center, Florence was the place where the rich went to buy goods that would showcase how wealthy they were. –Hanya Yanagihara

10. I feel happy here and want to stay in Milan for ten seasons and then retire at the age of 36. –Robinho

11. I drive around on my scooter in Milan alone – we don’t have bodyguards or anything like that. I am a fashion designer, not a celebrity, and although I get stopped for autographs and the like, I don’t think I am famous. –Stefano Gabbana

13. My favorite thing about Milan is that you see these guys, and it’s as if a spaceship came out of the most attractive planet invented and just dropped them off all across the city. –Brad Goreski

14. I moved to Milan when I was 15. I was always looking for something; I never really felt like I belonged where I was, so I went to live overseas. –Laura Prepon

15. I’ve spent a lot of years living with normal people. If I take a private jet to go to a meeting in Milan, well, that’s my business; I can do it. But I don’t live for it. –Brunello Cucinelli

16. I grew up in Perugia, Umbria, in a world outside of fashion, so I didn’t learn about it until I was older and moved away. In Milan, the women are really into fashion, and all the big fashion brands are based there, but I don’t think they feel pressure to look good all the time. –Monica Bellucci

17. You would never see anyone go to a restaurant in Milan wearing a jumpsuit! –Mariacarla Boscono

19. Sometimes I have ice cream for lunch. Gelateria Sempione in Milan is the best in the world, hands down. The chocolate sorbetto is amazing. –Margherita Missoni

20. I bought a place in Milan, but Missoni headquarters are out in the country, in Sumirago. My whole family eats out of the same vegetable garden; my mother raises chickens. I love the city, but if you’re always bombarded with stimulation, you get numb to it. I need to get bored to create. –Margherita Missoni

21. I love Milan because it’s my home town. But Paris is the dream city: even when you’re stressed out in shows, you look around, and everything is so beautiful. Then, in New York, I love the energy of the city. –Bianca Balti

22. Milan is my home, where I chose to go and where my heart really is. –Kaka

23. If Inter decide to sell me, I’ll pack my bags and go. If not, I’ll stay here in Milan where I am honestly very happy. –Mauro Icardi

See also
21 Magical Things to Do in Milan at Night + Milan Nightlife Guide!

24. My family is very much at home here in Milan. –Mauro Icardi

25. I think about Milan from morning to night, and there is certainly no lack of effort and desire on my part. –Clarence Seedorf

17. In Milan, I’m treated with the respect that doctors receive in America. It’s wonderful living where artists are revered. –Terence Trent D’Arby

18. Milan – the club and the city – is a very special place for us Dutch. –Klaas-Jan Huntelaar

19. To arrive in a city like Milan as a young man was a huge challenge. –Javier Zanetti

20. When I go to Rome, I fast on Saturday, but in Milan I do not. Do you also follow the custom of whatever church you attend, if you do not want to give or receive scandal. –Ambrose

21. I’ve been all over the world, and to be in Milan and see guys dressed as Jake and Elwood is amazing. They really have become a part of the culture. –John Landis

22. Milan. What a beautiful place to die. –John Carradine

23. Because we would not wear any clothes because it was so hot and the windows open and the swallows flying over the roofs of the houses and when it was dark afterward and you went to the window very small bats hunting over the houses and close down over the trees and we would drink capri and the door locked and it hot and only a sheet and the whole night and we would both love each other all night in the hot night in Milan. That was how it ought to be. –Ernest Hemingway

25. I think of Milan every day, really. I was really happy at Milanello. I love the team, the staff, everybody who works there. I love the fans. I miss Milan badly, I miss Italy. I don’t miss a single [Milan] game, and I don’t understand those that say that Calcio is in difficulty. It’s so competitive and complete. –David Beckham

26. I was in the fashion shows in Milan; I was seventeen, I was doing like 100 shows. People were asking, ‘How does it feel to be the model of the moment?’ It was hard for me to answer as myself. I barely spoke English. –Gisele Bundchen

27. In Italy, I am almost seen as German for my workaholism. Also I am from Milan, the city where people work the hardest. Work, work, work – I am almost German. –Silvio Berlusconi

28. Milan is showing a new and different face. At Porta Nuova, too, when they started construction, everyone was up in arms, saying Milan was going to lose its character. –Franca Sozzani

29. When I am at Rome I fast as the Romans do; when I am at Milan I do not fast. So likewise you, whatever church you come to, observe the custom of the place, if you would neither give offence to others, nor take offence from them. –Ambrose

30. You get funky things in Goa, so I like shopping there. Paris and Milan are also my preferred shopping destinations. –Karisma Kapoor

31. You’ll hear the rest. Milan is a city of music. –Marianne

33. Your victory here in Milan seems to have given you no pleasure. –Agapito Geraldini

34. To conquer Milan without firing a single shot. That says much about you. –Leonardo da Vinci

35. So what’s the big deal? Milan is full of housing. Apartment buildings are shooting up like mushrooms. –Armando

36. This is for you, but get out of Milan for a while. –Rocco Parondi

37. 12,000 men! Give me troops, sire. I will march into Milan and capture the ducal throne for you. –Cesare Borgia

See also
10 of the Best Historical Sites in Rome to Put on Your Rome Bucket List!

38. Cesare informs us that Louis possesses none of the Anjou pride. Still, should he invade Milan, we will impose an interdict upon France. Cutting them off from the Holy Sacraments – from salvation. –Rodrigo Borgia

41. I may live in Milan, but I’m still Sicilian. –Antonio Badalamenti

42. I will have one. Everyone smokes here in Milan. –Marquise Gentili

44. Milan, darling. Milan. Supermodels. Heh! Nothing super about them… spoiled, stupid little stick figures with poofy lips who think only about themselves. Feh! I used to design for *gods*! –Edna

45. Okay, good. Then you can have a delicious meal ready in ten minutes that anyone in Milan would die for. And that was too gay a sentence even from me. –Kevin Walker

46. Here we are, telecasting live by satellite, in Milan, Italy, the site this week of one of the newest, yet already one of the world’s most glamorous and exciting film festivals. –Entertainment Reporter