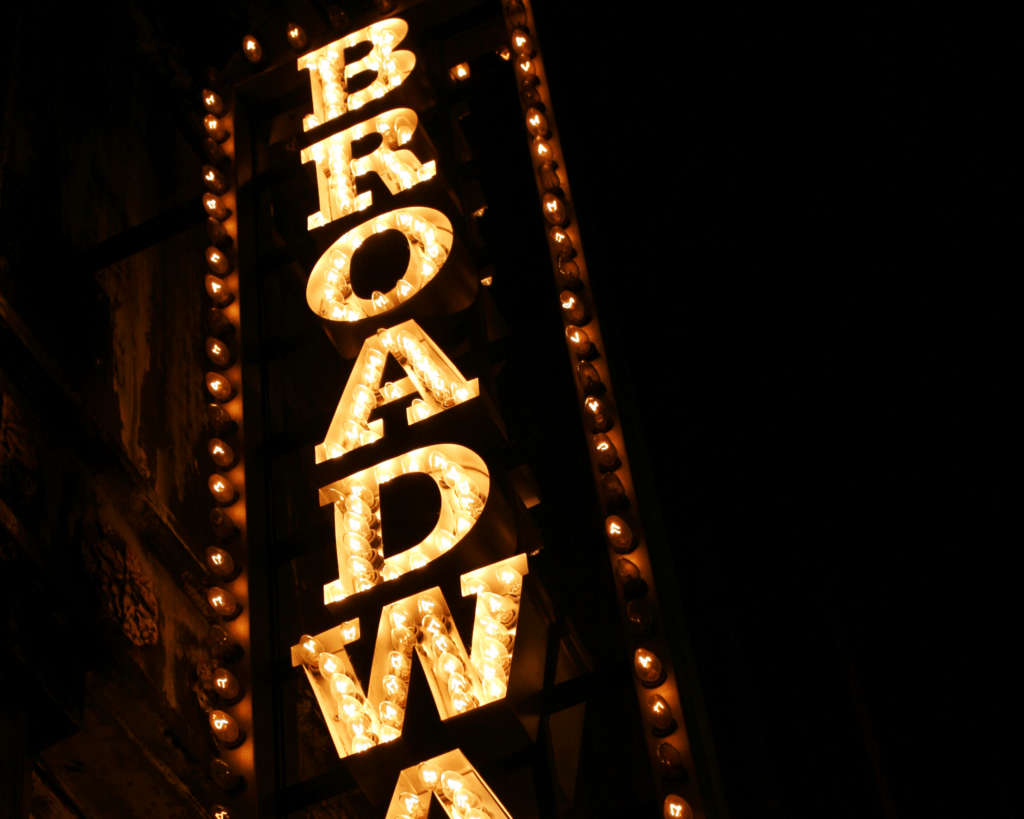 Looking for beautiful quotes about Broadway? The Great White Way has inspired some truly beautiful travel quotes. So whether you’re looking for travel inspiration or Broadway Instagram captions or Facebook statuses, here are my favorite Broadway quotes!

How to Use these Broadway Quotes

Feel free to use this post to find beautiful quotes about Broadway for your photo captions, Broadway Instagram captions, Broadway Whatsapp status, Viber status, Broadway Facebook status, or however you want!. If you do use one, I’d love if you linked or tagged me so I can enjoy your work!

The Best Quotes about Broadway

Here are my favorites!

Give my regards to Broadway –George M. Cohan

The dumbing down of the country reflects itself on Broadway. The shows get dumber, and the public gets used to them. –Stephen Sondheim

They bring in their trees and stand them up on the pavements so that swaths of Broadway are suddenly transformed into dark, pine-scented avenues. –Deborah Meyler

They say the neon lights are bright on Broadway. They say there’s always magic in the air. -The Drifters

I love the Broadway audiences, who relish live drama and don’t hesitate to display their enthusiasm. -Ian McKellen

I want people to be obsessed with Broadway and theatre as much as I am. -Frankie Grande

If you have something important to say, Broadway and New York are great places to say it. -Yakov Smirnoff

Every day of my life, I wish I was on Broadway. It’s my favorite place. It’s my heart; it’s my soul. -Frankie Grande

My one ambition was to go to Broadway, and I never gave up on that dream. -David Hasselhoff

There’s nothing that can match Broadway for stature and dignity. -Sammy Davis, Jr.

Broadway’s dark tonight, a little bit weaker than you used to be -The GooGoo Dolls

I enjoyed the courtroom as just another stage but not so amusing as Broadway. -Mae West

I like the fact that some of your favorite Broadway musicals are not made into movies. -Chance The Rapper

I had a hardscrabble childhood with my parents. I have a lot of baggage. To come down to the footlights and accept the audience’s affection inside a Broadway theater – that didn’t come easily to me. -Bette Midler

I’ve seen the lights go out on Broadway. I saw the ruins at my feet. -Billy Joel

Come along and listen to the lullaby of Broadway -Frank Sinatra

New York. What a town. Broadway. What a street. Boy, I’ve been waitin’ for years to get a crack at them Broadway bozos. And now I’m set. –Speak Easily

I think the fact that I grew up in show business had a real effect on my personality. If you were born in New York during the golden age of television, and you grew up on Broadway, that marks you. -Christopher Walken

It remains an incredible struggle for women in theater, and, in particular, playwrights and directors, to get their work seen and to not only get seen but to get it to Broadway. -Lynn Nottage

What I particularly like about Broadway is the camaraderie and the friendship of other people in other shows. Everybody knows you’re opening and cares about you. There’s a real village atmosphere. -Ian McKellen

I really wanted to be a Broadway kid. -Reese Witherspoon

I got into a Broadway show before I ever sang and danced. I learned how after I got in the show. -Dick Van Dyke

I thought it was all a flash in the pan. It wasn’t until Broadway came along that I felt I had really made it. -Julie Andrews

I hoped, hoped, that maybe I’d be lucky enough to do something on Broadway, in the chorus. -Jennifer Garner

It takes a d*** village to get a show on Broadway! -Keala Settle

Broadway was life-changing because it pushes you mentally, physically, emotionally – every way that you can be pushed. It makes you feel like there’s nothing you can’t do. It’s like doing your own stunts. -Keke Palmer

Broadway performers are the best-trained people on the planet. -Frankie Grande

There ain’t no mercy now on Broadway -Laura Nyro

The only reason anyone goes to Broadway is because they can’t get work in the movies. -Bette Davis

Being on Broadway is the modern equivalent of being a monk. I sleep a lot, eat a lot, and rest a lot. -Hugh Jackman

It was a different planet in 1967, the Broadway theatre. It had a little ashtray clamped to the back of every seat and the author got 10% of the gross. -Tom Stoppard

I’ve been alienating my public since I was 20 years old. When ‘American Buffalo’ came out on Broadway, people would storm out and say, ‘How dare he use that kind of language!’ Of course, I’m alienating the public! That’s what they pay me for. -David Mamet

My plan has always been to return to Broadway every 50 years. -William Shatner

We are living in the excesses of freedom. Just take a look at 42nd Street and Broadway. -Will Durant

I sing Broadway stuff in the shower, mostly. -Rita Moreno

The streets of New York are diverse, but when you go into a Broadway show, unless Denzel Washington is in it, or Fantasia’s in it, it’s a lot of old white people and gay men. -Billy Eichner

Theater in New York is nearer to the street. In London, you have to go deep into the building, usually, to reach the place where theater happens. On Broadway, only the fire doors separate you from the sidewalk, and you’re lucky if the sound of a police car doesn’t rip the envelope twice a night. -Tom Stoppard

Yes, I am a failed playwright. I had three shows on Broadway by the time I was 30. They all flopped, and I fled. -William Goldman

Pin these Broadway Quotes & Broadway Instagram Captions for Your Trip!